A discussion about artistic initiatives’ (re)turn to nature.

Halfway to Paradise
A discussion about artistic initiatives’ (re)turn to nature.

These are just a few examples of spaces created by artists in natural settings, outside of the big cities, and it is a trend that has grown in the recent years, mirrored especially during the pandemic by a general interest in experimenting with life in the countryside. How can these artistic initiatives inspire more than a life-style, how can they inscribe themselves in a paradigm of understanding and living with nature rather than colonise it, how can they create communities that breathe in a different rhythm than that of precarity and hyper-consumption that characterises much of the daily life in contemporary cities?!
This is hopefully the first in a series of discussions on these topics, and an attempt to connect similar initiatives and thus strengthen the models they establish.

Adriana Chiruta lives and works in her favorite life-art project, a contemporary art eco-laboratory under construction since 2014, in the region of Sibiu, called Carambach, an “invented” country for artists, scientists, nature and human rights activists. She is an artist with hybrid practices. A performing arts professional, theatre director and dance passionate, with a philosophy background, she enjoys taking post-conceptual walks through different mediums (sound, video, text, etc.). Structured as performative installations, her works are meant to direct the viewers senses’ from the exterior art objects, toward themselves, as subjects of art invited to occupy the stage of their own life, personally, socially and politically.

Irina Botea Bucan has developed an artist-educator-researcher methodology that questions dominant socio-political ideas and centralizes human and non-human agency as a vehicle for meaning. Jon Dean has been working in the overlapping fields of community-based participatory arts and education for over thirty years. Apart from their individual practices, they have also been collaborating on educational, artistic and cultural projects since the early 1990s. Due to their shared belief in the importance of working in non-traditional 'art spaces' they decided to literally build upon previous experiences through developing a house-garden residency for artists and non-artists (human and non-human) in the village of Radesti, Arges county. Since the beginning of 2019 they have renovated a small barn and worked alongside a wide range of local residents as well as invited guests to foster new collaborations.

V. Leac is a poet and a performer in his or his friends’ art and life actions, exhibitions, films. Since 2010, he created a place of resistance, a space that survived the erosion from the river Mures, in the village of Bodrog, Arad county. Together with artists and other people from Arad and Timisoara, passionate for permaculture, they used the stripe of land between the small house and the river to create a garden with vegetables, medicinal plants, fruit, wild herbs, following a concept of multiple natures. Since 2020 he started a new project in Romanii de Jos, Valcea county, a dendrology park in which the trees planted there carry the names of his friends, artists and poets.

Daniela Palimariu is an artist and a co-founding member of Sandwich collective. Sandwich started in 2016 as an artist-run space and is constantly expanding and reinventing itself. In 2022, a new project imagined by Sandwich is to be inaugurated: the Watermelon Residency, in the small town of Bechet, Dolj county, an important Danube port and close to the sandy region of Dabuleni, famous in Romania for its watermelons production. The residency programme is planned for local and international artists, who are invited to propose either research projects or site-specific works for the place.

Delia Popa is a visual artist who researches the almost imperceptible space between discourse and reality, representation and control, while she constantly questions man’s insistence on detaching oneself from other animals. She depicts humans under zoomorphic forms, unveiling their cruelty towards other species, she endows plants with anthropomorphic traits and draws parallels between her work as an artist and her work as a gardener. Since 2015, she builds and uses her studio and cultivates plants in the village of Cretesti, Ilfov county, in her grandparents’ house and garden.

The discussion is organised in a hybrid form, with the participants gathering in person and the public invited to join online, by accessing this link: https://whereby.com/public-meetings. * The discussion takes place in Romanian language.

The residency of Adriana Chiruta in Bucharest and this discussion are complementary activities to Regenerative-Reliable-Resourceful, the mapping of resilient practices in the Romanian countryside, in the field of food production and distribution, construction materials and cultural initiatives, that tranzit.ro develops in the frame of C4R project and of the Experimental Station for Research on Art and Life.

The C4R project aims to foster resilient and inclusive European societies by developing participatory cultural practices of resilience and ensuring social transversality. C4R offers conditions for the production and dissemination of a diversity of cultures of resilience to counterbalance the over-hype of catastrophist productions and to influence and transform European collective imaginaries.

The project is supported by the EC's Creative Europe - Culture programme (2020-22) and is carried out by a collective of four partners: Atelier d'Architecture Autogérée (FR), Casco Art Institute (NL), tranzit.ro (RO) and Nethood (CH).

*The platform whereby can be accessed directly from an internet browser, preferably Chrome or Firefox. It doesn’t require the installation of an application or the creation of an account. 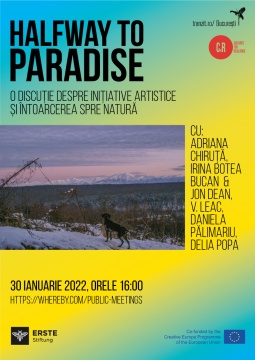