On November 21, we invite you to a discussion between Corina Bucea and the conceptual artist Jens Haaning about his artistic practice.

As GIBCA tells us (Goteborg Biennial 2017), "Jens Haaning is one of the most significant and critically-engaged artists of his generation"; therefore, its curator, Nav Haq, dedicated an entire section to the Danish artist's practice. This was one of the most extensive presentations of Jens Haaning's body of work so far, especially in the northern region.

To most of us, his name is known from Nicolas Bourriaud's book "Relational Aesthetics", that firstly appeared in Romania illegally photocopied and in French language, in the early 2000s. Then it was translated by Cristian Nae, at IDEA publishing house, in the frame of their Balkon collection in 2007.

Often, through a seemingly simple, though difficult task, Jens Haaning puts into action the complex mechanisms of economic and social relations around any act that involves physical or symbolic moving and dislocation.

Jens Haaning is also working in collaboration with other artists. He has worked together with Santiago Sierra for "The Copenhagen Declaration". The work refers to “The Copenhagen Declaration” of the 1995 World Summit for Social Development, which was advocating the eradication of poverty and unemployment and social inclusion. The work was done 20 years after the declaration was signed.

In Romania, Jens Haaning participated at Periferic 7 International Art Biennial back in 2006 with a new work: "10 catalogs Periferic 7 sent to Africa / "10 cataloage Periferic trimise în Africa". The work started with the act of sending 10 sets of catalogs of the biennial from Iasi, Romania to the central post office in Conakry, Guinea.

In 2018, Jens returned to Romania and created a permanent new work: “Untitled (Light fitting from the House of the People, Bucharest)”. If in 2006 he decided to deprive the organizers of 10 sets of biennial catalogs and re-insert them in a situation where they can only signify the uselessness outside the field of art (they were sent to the central post office in Conakry, Guinea), in 2018, Jens Haaning has dislocated a light fitting from the People's House in Bucharest in order to permanently install it in the tranzit.ro/ Iași space.

Corina Bucea is a cultural manager based in Cluj, Romania. She has extensive experience in coordinating cultural projects, arts production and cultural policies. Corina is one of the founding members of the contemporary art and culture space Fabrica de Pensule / The Paintbrush Factory in Cluj, Romania, where she currently is a member of the Artistic Board.

This presentation is realized in partnership with Colectiv A from Cluj and is part of the project TRECUT INCOMOD / INCONVENIENT PAST. This project proposes a series of cultural interventions that critically examine the transformations of the public sphere and memory policies in relation to the hegemonic character of capitalist discourses today, by using various cultural production means: exhibitions and film screenings (Harun Farocki), artistic research (Minna Henriksson and Jens Haaning), public presentation and theoretical investigation (Marius Babias and Sezgin Boznik).

Curated by Livia Pancu and Florin Bobu, TRECUT INCOMOD / INCONVENIENT PAST is a project organized by 1+1 in collaboration with tranzit.ro/ Iasi, Neuer Berliner Kunstverein (n.b.k.), German Cultural Center Iasi and is co-financed by the Administration of the National Cultural Fund. The project does not necessarily represent the position of the Administration of the National Cultural Fund (AFCN). AFCN is not responsible for the content of the project or the way the project results can be used. This is entirely the responsibility of the beneficiary of the funding. 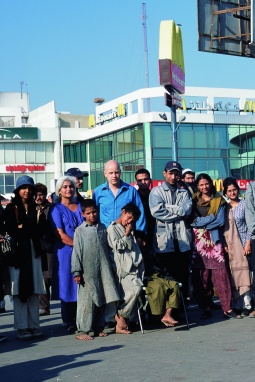 “Redistribution (London-Karachi)”, 2003, in the frame of “Publicness”, ICA London, UK