Sezgin BOYNIK: Theory of Image in Videograms of a Revolution

"If the starting point of Harun Farocki's film methodology is to challenge the limits of our knowledge (“what do I know?”), then the question I want to ask is about the filmic devices of this methodology. In the case of Farocki, it is the images themselves that enable this heuristic device to operate. By arguing that the stories of Farocki are not a mere “stuff” that he fits into films, I want to discuss in which way the formal operations of cinematic devices (such as dialectics of contradictions, and the excess of information) contribute to this methodology of learning. Following this theoretical introduction, I will discuss Farocki’s theory of image in his work Videograms of a Revolution, an experimental documentary about the Romanian Revolution made in collaboration with Andrej Ujica in 1992. By looking at the available materials on the film, I will discuss what is the “filmic articulation” in Videograms. Especially I will focus on the hidden meaning, or the latent script, and the index of images in Videograms. By arguing for a more complex set of theoretical tools, I will discuss the methodology and the politics of image in Farocki through the question of representation of revolution. I will argue that without considering Farocki’s Marxist understanding of images as a result of the dialectics of contradictions, we are not able to fully understand the question of violence and history which is posed in Videograms". (Sezgin Boynik, November 2018)

Sezgin Boynik (1977) lives and works in Helsinki. He has completed his PhD in Jyväskylä University Social Science department on the topic of Cultural Politics of Black Wave in Yugoslavia from 1963 to 1972. He has been publishing on punk, relation between aesthetics and politics, on cultural nationalism, Situationist International, and Yugoslavian cinema. Co-edited reader “Nationalism and Contemporary Art” (with Minna L. Henriksson, Rhizoma & EXIT, Prishtina, 2007), and co-authored book on “History of Punk and Underground in Turkey”, 1978-1999 (with Tolga Guldalli, BAS, Istanbul, 2008). Apart from scholarly work, he is also active as a conceptual artist. Recent articles include “New Collectives” (Retracing Images, Brill, Boston & Leiden, 2011), “Cultural Policy of Dusan Makavejev” (Kino! Journal No. 15, Ljubljana, 2011), “Discontents with Theoretical Practices in Contemporary Art” (Journal of Visual Art Practice 10:2, London, 2011) “Art of Slogans – in two parts” (TKH no 19 and 20, Belgrade, 2012), “Social Surrealism: Historical-Materialist Theses on the Mystery of Art” (open space journal, Vienna, 2013), “Marxist-Leninist Roots of Zenitism” (Filmkollektiv, Frankfurt, 2013), “Counter-Godard: On Makavajev’s Anti-Formalism” (Kino! Journal No. 15, Ljubljana, 2015) and “Between Privileges of Unlearning and Formlessness of Anti-Knowing: Ideologies of Artistic Education” (Inca Press, Forms of Education, Seattle, 2016). Also, he is the author of the artistic books “Counter-constructivist Model” (co-authored with M.L. Henriksson, Labyrinth Press, Stockholm, 2012),“Still Stealing Steel: Historical-Materialist Study of Zaum” (Rab-Rab Publication, Tbilisi, 2014) and “Noise After Babel: Language Unrestrained” (Spector Books, Leipzig, 2015). He is editor of Rab-Rab: Journal for Political and Formal Inquiries in Art. 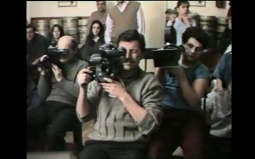