Theories of Property and Poverty in Modern Philosophy

Saturday, December 16th, at 4 pm, took place at tranzit.ro/ Cluj the fourth meeting of the seminar about modern theories of property and poverty. The discussion focused on Bernard Mandeville and his Fable of the Bees and the Essay on the Nature of Society. The debate on the nature and status of luxury in the first three decades of the XVIII century, in the context of which Mandeville's texts have appeared, represents the innate sequel of the debate about the nature of property in the XVII century. The understanding of the theoretical and political changes that have taken place in the passage from one debate to another is but one of the aims of our seminar. 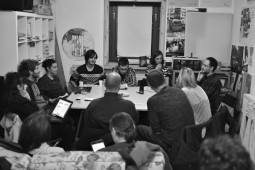