with Radu Jude and Claudiu Turcuș

The event presented Radu Jude and Claudiu Turcuş in a dialogue about Jude’s most recent film The Dead Nation [Țara moartă], premiered at the Locarno Film Festival 2017, at the section “Signs of Life”. The film focuses on the period from 1936 to 1946 in Romania by critically examining the anti-Semitism that became the state politics during the Second World War and which constituted the catalyst for some of the most absurd nationalist and racist attitudes. Jude’s film is equally a political statement, an anthropological document and an intermedial experiment. The film comprises found footage portraits, images from the archive of Costică Acsinte (a photographer from Slobozia during the ‘30s and ‘40s), texts from Emil Dorian’s diary (read by Radu Jude himself), as well as various audio sequences of political propaganda of the authoritarian regimes of the epoch (King Carol II, „The Legion” fascist movement, Antonescu’s autocracy and the communist dictatorship).

Radu Jude is a film director, with a highly distinct voice and whose approach is salutary within a cinematic context dominated, in the last 30 years, by either moralizing and judgmental attitudes or auctorial pride, if not plain mediocrity. Radu Jude and Claudiu Turcuș will discuss the role of the cinema as a possible “editor” of history and that of a mediator of the collective memory politics, through examples covering his entire filmography. 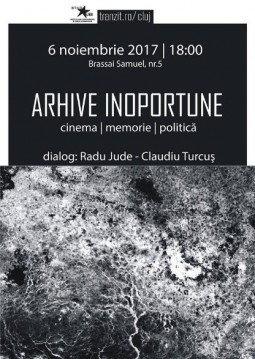