An Art Work in Political and Ideological Context

Moderation: Vahida Ramujkić
Discussion will be held in English and in Romanian with consecutive translation available.
Translator: Sorana Lupu

This discussion was proposed by Dan Acostioaei as his contribution to “The Gliterr(y) and the Misery of the European Middle Classes”.

Dan Acostioaei lives and works in Iaşi, Romania. He is a visual artist and he is teaching at the "George Enescu” University of Arts. He is a founding member of Vector Association. His works focus on the identity models of the Romanian society in transition, as well as on the ideological borders between the economy and the conditions of artistic production in Eastern Europe. His projects have been presented at exhibitions such as One Sixth of the Earth - Ecologies of Image, MUSAC, Leon, Spain (2012), Transitland: videoart in Central and Eastern Europe 1989-2009, Museo Nacional Centro de Arte Reina Sofia, Madrid, Spain (2010), Illuminations, Level 2 Gallery, Tate Modern, London, United Kingdom (2007), In Times of Hope and Unrest, MNAC, Bucharest, Romania (2015), Art Encounters, Timişoara şi Arad, 2017.

Vahida Ramujkić (Belgrade, 1973) is artist who bases her work in social context. She initiated and collaborated in numerous long-term projects based on collaborative and creative work as impeller for establishing new social relations. From 2001 to 2007 her main corpus of works develops through Rotorrr collective in Barcelona and is dealing with politics of neoliberal development of the city. Work related to migration issues in early 2000s is compiled in the book “Schengen with ease” in 2006. From 2007 she initiates a library of history textbooks under the name “History in dispute” – on the base of which she develops a methodological approach for collaborative analysis of the phenomenon of historic revisionism in former Yugoslav region (Mostar, Banja Luka, Berlin, etc). Another long term project she initiates in collaboration with Aviv Kruglanski in 2008, “Documentary Embroidery” – uses the technique of embroidery in new context for collective documenting - analyses and articulation - of social realities (Barcelona, Bristol, Mexico City, Mostar, Aradac, Štoj, Warsaw, etc). She is active and collaborates in more collectives such as Irational.org, ReEX, Antifascist Alliance of Serbia, etc. 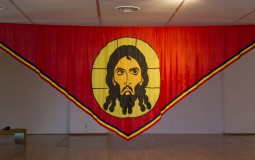