Nebojša MILIKIĆ: REHEARSAL OR RE_ENACTMENT OF CULTURAL POLITICS OF THE PETITE BOURGEOIS PARTY

A separate activity will be The Public Discussion about an Art Work in Ideological and Political Context with the participation of the Initiative of The Petit Bourgeois Party in Iaşi. The time will be announced on the 29th of September.

In the frame of its participation to the contemporary art biennale Art Encounters 2017, Timişoara and Arad, independent spaces section, tranzit.ro/ Iaşi is offering you a meeting with the cultural worker and activist Nebojša Milikić who, together with the delegation of IPBPI – Initiative of the Petit Bourgeois Party in Iaşi will discuss about the works that are part of his private art collection as well as the motivations behind each acquisition. A written report about all the works presented during the lecture – performance will be displayed in the space allocated to tranzit.ro/ Iaşi participation, for all the duration of the biennale. 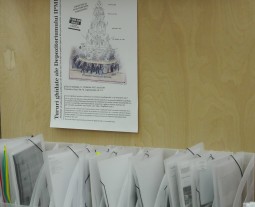