A two-day discussion with Sezgin Boynik and Minna Henriksson: a presentation and a session discussing some important texts on nationalism.

The presentation on the first day started with introduction of the context and content of the book Contemporary Art and Nationalism – Critical Reader (published in 2007), which is a response to a series of exhibitions on Balkan art in important European art venues. From there they moved on to more recent works on nationalism and art. Sezgin Boynik presented his theses on the role of artistic institutions in the reproduction of objective nationalistic ideologies and opened the question regarding the contradictions of artistic subjectivities with these institutional mediations. Minna Henriksson introduced her artistic work dealing with construction and reproduction of nationalism and fascism in Finland. She focussed on three projects, one dealing with the swastika symbol in Finland, another with the history of race science in the Nordic countries and the third about the role of paper industrialists in supporting right wing movements.

The presentation was live streamed on the tranzit.ro's facebook page and will also be uploaded on the videostream.ro website.

In the second day, we collectively discussed two texts that are abstracting the discussions on ideologies of nationalism. Etienne Balibar: “THE NATION FORM: HISTORY AND IDEOLOGY” and Rastko Mocnik: “SUBJECT SUPPOSED TO BELIEVE AND NATION AS A ZERO INSTITUTION”. We also discussed the documentary “The Videograms of a Revolution” (1992) by Harun Faroki and Andrei Ujică.

Minna HENRIKSSON (b. 1976, Oulu) is a visual artist currently living in Helsinki. She has studied art in Brighton, Helsinki, and Malmö. Her work is research-based and includes a disparate range of tools including text, drawing, linocut, and photography. Her work is often collaborative and aims to relate to discussions arising from anti-racist, leftist and feminist struggles. She has had an ongoing theoretical engagement on nationalism together with Sezgin Boynik since 2006. Henriksson co-edited book Art Workers – Material Conditions and Labour Struggles in Contemporary Art Practice focusing on art workers’ labour conditions in Finland, Sweden, and Estonia. Henriksson is a member of the group Helsingin Nuorisofestivaali 1962 – Muistityöryhmä, which produced radio play ‘Festival 62’ that examines mechanisms of silencing. Also, Henriksson is active in Helsinki in collective study group Night Schoolers and leftist artists’ association Kiila.

Sezgin BOYNIK (b. 1977), lives and works in Helsinki. He has completed his Ph.D. in Jyväskylä University Social Science department on the topic of Cultural Politics of Black Wave in Yugoslavia from 1963 to 1972. He has been publishing on punk, the relation between aesthetics and politics, on cultural nationalism, Situationist International, and Yugoslavian cinema. Co-edited reader “Nationalism and Contemporary Art” (with Minna L. Henriksson, Rhizoma & EXIT, Prishtina, 2007), and co-authored book on “History of Punk and Underground in Turkey, 1978-1999” (with Tolga Guldalli, BAS, Istanbul, 2008) Apart from scholarly work he is also active as conceptual artist. Recent articles include “New Collectives” (Retracing Images, Brill, Boston & Leiden, 2011), “Cultural Policy of Dusan Makavejev” (Kino! Journal No. 15, Ljubljana, 2011), “Discontents with Theoretical Practices in Contemporary Art” (Journal of Visual Art Practice 10:2, London, 2011) “Art of Slogans – in two parts”(TKH no 19 and 20, Belgrade, 2012), “Social Surrealism: Historical-Materialist Theses on the Mystery of Art” (open space journal, Vienna, 2013), “Marxist-Leninist Roots of Zenitism” (Filmkollektiv, Frankfurt, 2013), “Counter-Godard: On Makavajev’s Anti-Formalism” (Kino! Journal No. 15, Ljubljana, 2015) and “Between Privileges of Unlearning and Formlessness of Anti-Knowing: Ideologies of Artistic Education” (Inca Press, Forms of Education, Seattle, 2016). Also he is author of artistic books “Counter-constructivist Model” (co-authored with M.L. Henriksson, Labyrinth Press, Stockholm, 2012),”Still Stealing Steel: Historical-Materialist Study of Zaum” (Rab-Rab Publication, Tbilisi, 2014) and “Noise After Babel: Language Unrestrained” (Spector Books, Leipzig, 2015). He is the editor of Rab-Rab: Journal for Political and Formal Inquiries in Art.

The presentation Contemporary Art and Nationalism is part of the project RE-IMAGINED COMMUNITIES organized by 1+1 in partnership with tranzit.ro/ Iaşi and „Alexandru Ioan Cuza” University Iași and it is co-funded by the Administration of the National Cultural Fund. The project does not necessarily represent the position of The Administration of the National Cultural Fund. AFCN is not responsible for the content of the project or how project results can be used. These are entirely the responsibility of the beneficiary of the funding. 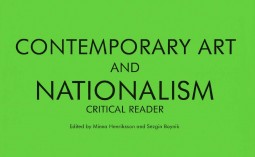