Ana SZEL will make a presentation about the legislative context regarding Romanian cinematography during the socialist period, as it is reflected by the documents from “Sahia” Film's Archive.

“Alexandru Sahia” Film Studio was established in 1950 as the only institution producing documentary and popular science films, and until 1974 also weekly newsreels (Agricultural news, Communist Youth news, Scientific and Sports news, etc.). From 1973 until 1989, the Studio produced documentary films, scientific films, political reports and propaganda, and commercial films. During the '90's “Sahia” limited its production capacity and was not able to survive the transition.

Ana SZEL graduated the National Music Academy from Bucharest and Tel Aviv. Afterwards she studied Communication at the Political Studies University SNSPA, attended the Open Mind Cognitive Sciences Master Degree at the Philosophy Faculty of Bucharest, and she recently graduated the archival courses at SNPA. Together with Ana Lungu, she wrote, directed and produced the feature film Belly of the whale, who was selected and screeened at Locarno Film Festival, Vancouver Film Festival and Sarajevo Film Festival. She worked as casting director for the feature The Death of Mr. Lăzărescu by Cristi Puiu. Last year Ana took part in the working group established by the Ministry of Culture, aimed to reform the National Film Archive.

The seminar LAWS, NORMS AND REGULATIONS (Working Group And Public Presentation) is part of the project RE-IMAGINED COMUNITIES, organized by 1+1 and tranzit.ro/ Iaşi in collaboration with “Al. I. Cuza” University, Iaşi and co-financed by AFCN – The National Cultural Administration Fund.
Partner: TIMPUL magazine 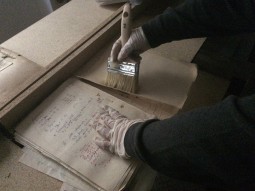