The question of art being linked to or embedded in politics comes into discussions no matter what kind of political platform we support. Following the first round-table talk on “art ft. politics” which took place on 22nd November 2016 with the participation of young artists and authors from different disciplinary fields, in the second presentations we will focus on topics such as the compromise between the aesthetics and the political message; the dilemma of accepting funding from political sources; the inefficiency of certain criticism and whether the social and individual responsibility of the artist can be described.

Moderator:
Janka Visky is a student of Political Science at the Babes-Bolyai University.

The discussion will be in Hungarian. 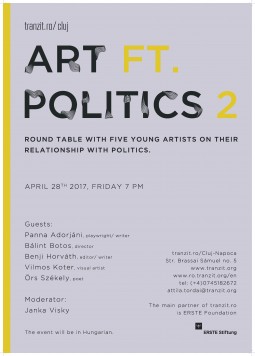