The Magurele Laser: A Solution Looking for a Problem

There are more than 60 years since the first laser gun threw its condensed photons into the world, the invisible rays scan your pack of biscuits and everyone #resists on the background of green-red-blue screenings. What we know is that our knowledge is limited concerning the working on the “laser project” in the “secret” bunkers of the Magurele Institute for Atomic Physics, but we are fascinated as cats staring at the light point running on the carpet. We’re waiting for fresh information from the new ELI-NP, “the big laser” and “the big project”. (Claudiu Cobilanschi)

Extreme Light Infrastructure (ELI) will be the only European and International Centre for high-level research on ultra-high intensity laser, laser-matter interaction and secondary sources with unparalleled possibilities.
Laser-based Nuclear Physics pillar will be built in Magurele (near Bucharest/Romania) and will focus on laser-based nuclear physics. While atomic processes are well suited to the visible or near visible laser radiation, as a third pillar ELI-NP will generate radiation and particle beams with much higher energies, brilliances suited to studies of nuclear and fundamental processes.

Claudiu Cobilanschi is an artist based in Bucharest.

“When lasers were invented in 1960, they were called “a solution looking for a problem”. Since then, they have become ubiquitous, finding utility in thousands of highly varied applications in every section of modern society, including consumer electronics, information technology, science, medicine, industry, law enforcement, entertainment, and the military. Every day virtually every person is affected in one way or another by lasers. In the medical field, lasers have revolutionized surgery and we can now restore sight to the near-blind with their help. With its origins in the theories of scientists like Einstein, in 1960 Theodore H. Maiman created the first working laser at Hughes Research Laboratories in Malibu, California. It used a solid-state flashlamp-pumped synthetic ruby crystal to produce red laser light at 694 nanometres wavelength. Later that year, Iranian physicist Ali Javan, working with William Bennet and Donald Herriot, made the first gas laser using helium and neon.”

The event is part of the “/ Natural” programme developed by tranzit.ro/ București. 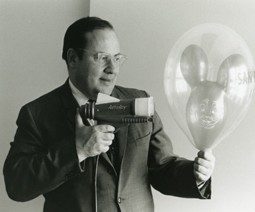 Arthur Leonard Schawlow was an American physicist. He shared the 1981 Nobel Prize in Physics with Nicolaas Bloembergen and Kai Siegbahn for his work on lasers.