A definition of politics in a physical form

"Using as a starting point two of our projects that are centered around the neighborhood gardens, the presentation will focus on the different approaches on the public space that are taking form in these gardens.
The gardens next to apartment buildings are a definition of politics in a physical form. How do we choose to live together in a space that belongs to each of us and to all of us? How do we share this space with those similar to us and those who are different? What are the responsibilities that we choose to take up, from the most practical issues to the decisions that shape the ideological identity of the space.

After 1989, when citizens were given the possibility to buy at affordable prices the state-owned apartments in which they lived, the tenant associations became owner associations. The land on which the apartment buildings are built belong to these owner associations, but the spaces around the buildings are public spaces, commons that are placed in the care of the owner associations. The presentation will focus on these uncertain spaces, positioned in the midst of the tensions between ownership, good housekeeping, indifference, belonging and exclusion. It will focus on the neighborhood gardens as public spaces, always in the danger of indifference and neglect as premises for privatization. Privatization where possibility is cleansed."

h.arta is a group of 3 women artists (Maria Crista, Anca Gyemant and Rodica Tache) whose projects focus on knowledge production and alternative educational models in a feminist frame. They use different forms and formats, such as events, discussions, publications, everyday objects attempting to create new spaces for political expression and action. Their projects are most of the time based on collaboration and we frequently work together with other artists, human rights activists, schools etc. Their methodology is based on friendship, which they understand as an everyday negotiation of differences, as a way of learning from each other, and as a political statement about the power of solidarity.

The presentation is part of the "/ Natural" programme of tranzit.ro/ București. 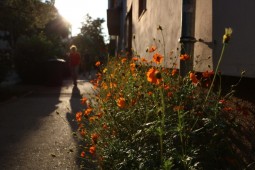