The last American elections have brought to the spotlight a phenomenon that until recently was lurking only in the shadows of Internet: the Alt-Right movement. Regarded suddenly with alarmed attention by the mainstream press, and immediately installed in the strategic seats of the new White House administration, the movement claims to be a reaction both to the hypocritical moralism of PC liberalism, and to the neoliberal evangelism of traditional conservatism. After neoconservatism and the new right, here we have the third movement of alternative rebirth of the Right in just a few decades – with all its specific differences: the shifting of its social and institutional base towards the young urban middle class, the radicalization and disenchantment of the old conservative mystique by means of its grounding in so-called „realism” and „science” (i.e. cynicism and phrenology), the hijacking of the identity discourse and victimary repertoire of the new left and its instrumentalization in defense of the „silent majority”, all aseptically and conveniently packed up in layers upon layers of self-styled irony and provocation. A very self-amused fascism has thus reached not only the center stage, but also the operation desk. How new and serious is this sad old joke – we will find out and get terrified on Friday. 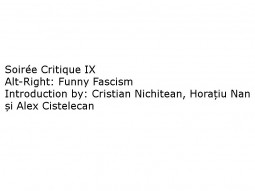