Căminul Cultural presents two conferences as part of the series The Chomsky-Foucault Debate:

Nick Srnicek
Inventing The Future: Postcapitalism And A World Without Work

We live in an era where the greatest mobilisation of people leads to the smallest increment of change, where the future appears to have been cancelled. What is the source of this situation? And what can be done? This talk will analyse the recent cycle of struggles stretching from the anti-globalisation movement to the Occupy movements in order to uncover a common limitation. In its place, this talk will put forth an alternative path forward: one which liberates us from work and which constructs new modes of freedom.

Nick Srnicek is a political theorist. Along with Alex Williams, he has co-authored the #ACCELERATE Manifesto for an Accelerationist Politics and Inventing the Future: Folk Politics and the Left (Verso 2015). He is the author of Inventing the Future (Verso, 2015 with Alex Williams) and Postcapitalist Technologies (Polity, 2016). He is currently researching the epistemology of economic models, post-work futures, and repertoires of contention in social movements.

Helen Hester
After Work: What's Left and Who Cares?

Helen Hester will discuss the role of social reproduction in leftist theories of the end of work.

Helen Hester is Senior Lecturer in Media and Communication at the University of West London. Her research interests include technofeminism, sexuality studies, and theories of social reproduction, and she is a member of the international feminist collective Laboria Cuboniks. She is the author of Beyond Explicit: Pornography and the Displacement of Sex (SUNY Press, 2014) and the co-editor of the collections Fat Sex: New Directions in Theory and Activism (Ashgate, 2015) and Dea ex Machina (Merve, 2015). She is also the editor of Ashgate’s 'Sexualities in Society' book series. 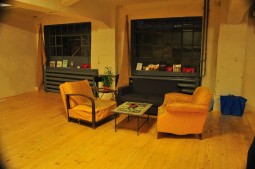