Throughout her residency, Alexandra Croitoru will work together with Cristian Nae on editing the artist book Brâncuși. O viață veșnică / An afterlife, which will be published this autumn by Salonul de proiecte in collaboration with IDEA Publishing, with the financial support of AFCN and of the Plan B Foundation.

"The research I started in 2009 focuses on the cult of Brâncuşi in Romania, developing in the direction of the connection between the artist and the national discourse, tracking down the birth of the legend, how the myth became established, how the cult materialised. The research is not exactly an interpretation of Constantin Brâncuşi's life and work, but instead an analysis of the national representativity of the artist the way it is reflected in specialist literature, in literary fiction, in governmental, commercial and advertising strategies, or in crusades such as that concerning the repatriation of the artist's remains. The idea is to outline the cultural, historical, political and social background that made possible the propagation of this cult, debating its errors of judgement, in the artistic context as well as in the broader context of today's Romanian society. I believe it is extremely important to maintain a critical attitude and to always question the social and political context in which we are active; I hope that this research has opened an avenue for perceiving Brâncuși in a more complex manner, beyond the specificities of art history, as a symbolic capital exploited by various social actors. Moreover, I hope that this type of research can become an instrument for observing the ways in which cultural production in general is instrumentalised in today's discourses about capital and power." (Alexandra Croitoru)

Alexandra Croitoru (b. 1975, Bucharest) is a visual artist, living and working in Bucharest. Between 1993 and 1998 she attended the National Academy of Arts in Bucharest. Starting with 1999 she has taught Representation Techniques – Photography at the Photo-Video Department of this institution; in 2014 she got a PhD in Visual and decorative arts, with a thesis on Brâncuși's nationalisation. Since 2011 Alexandra has been the co-curator of the Salon de proiecte, an exhibition programme active within MNAC Anexa, Bucharest.

The main partner of tranzit.ro is the ERSTE Foundation. 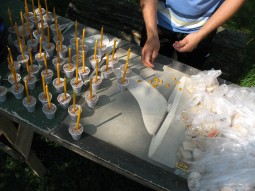