A conversation with the writers Dănuț Ungureanu & Marian Truță and the literary critic Mihai Iovănel, starting from the book with the same title, published by the two authors in the collection “Nautilus – science fiction” of Nemira Publishing House in 2014.

Vegetal tells the story of a post-Monsanto world, found in an unsettling rural state, in which, in order to survive, people have to destroy precisely the cultivated nature. Pictured through the eyes of a pre-adolescent boy, this world brings together the patriarchal and apparently immemorial cliches of the Romanian village with the fears and phantasms of childhood, all on the background of the endless fight for mastering nature.

Vegetal interrupts the present flux of ecological anguishes, of post-industrial spectres and rising waters, offering us all of a sudden another perspective, a refreshing one, of an unusually intense green, which most likely we won’t be there to describe anymore.

The event is part of the programme “/ Natural”, developed by tranzit.ro/ București: http://ro.tranzit.org/en/project/bucuresti/2014-01-01/natural. 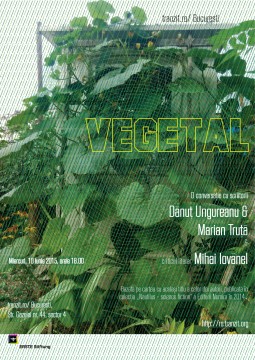