We are inviting you to the launching of the book - The Era of Traian Băsescu (Florin Poenaru, Costi Rogozanu coordinators, Tact 2014) followed by a debate about Romania in the last decade. Beyond the character of Traian Băsescu, whose idiosyncratic way decisively marked his mandate of president, we would like to open a discussion about the transformation of the Romanian society in the past decade. Which were the main changes, the major lines of separation and social conflict, the main themes, obsessions and debates? The era of Traian Băsescu was the era of big social polarizations, economic as well as ideological, and the financial crisis managed by austerity deepened a neoliberal approach towards the state and the economy. What remains after this Băsescu project and what can we expect next? These are just a few of the questions we want to debate with you and with some of the volume's authors 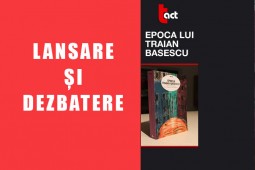