In the '80s, fluorescent colours, the so-called "neon" colours, marked pop culture in the West; later on, in Romania, in the early '90s, these colours were highlighting the shift towards another aesthetic register, characteristic for the so-called "transition" period – from socialism to capitalism. Leggings, bracelets, miniskirts, tee-shirts, footballs, backpacks, pens, lollypops, pencil cases, chewing gum wrappers etc. were slightly more valuable for the children and adolescents of those years when they were adorned by one or several of these fluorescent colours. In an apparently bizarre twist, but most likely due to an arcane algorithm of fashion, a new popular reconsideration of these colours it taking place nowadays.

Certain physical properties of substances, for instance their colour or their fluorescence, are determined or influenced by the way in which said substances absorb and emit electromagnetic radiation. Whereas in the case of colour, as a rule, emission and absorption occur with the same intensity and in the same spectrum of radiation, in the case of fluorescence substances emit electromagnetic radiation of a higher intensity than that of the radiation absorbed within the same spectrum. The explanation is that radiation absorption occurs in spectrums other than the visible one, for example in the invisible spectrum of ultraviolet radiation. The luminosity surplus that characterizes such colours is thus explained by the emission in the visible spectrum of this surplus of absorbed radiation.

Symmetrically, the fluorescence of the covers of these volumes could provide a quick key for the reading of the possible usefulness of artist books, as well as of the potential role artists could play in society. Artists, like fluorescent substances, can have the property of detecting and transferring into the visible spectrum apparently mundane and unimportant issues, individual situations and gestures, which together make up the social and political dynamics of the world we live in.

This publication includes two independent projects, that of Cristina David and that of Cezar Lăzărescu, two contemporary visual artists from different generations who live and work in Romania – in Bucharest and in Iaşi, respectively. By bringing them together in this formal manner, the editors hope that the contextual and conceptual dialogues that might arise between the two artists will be included in the arbitrary, personal constructions of each reader. The two volumes can function separately, each of them being designed as a project in itself, by each of the artists.

The volume about Cezar Lăzărescu, the "secret agent" of the '90s generation in Romanian contemporary art, may be viewed as a reflection of a patchy vision of history, be it personal history or any of the possible social and political histories he might come across. Drawing inspiration from his work "Îmbătrânirea hârtiei" ("The aging of paper"), published in a fanzine in 2004, the white pages of this publication only function in the future, their measure being the time the paper ages, starting with the moment it is inserted in the book.

This patchy vision is also a parallel for the relationship between tranzit.ro/ Iaşi and Cezar Lăzărescu, his works and his modus operandi: the organisation in 2012 of his first personal exhaustive retrospective show – Îmi place Periferic 3 (I like Periferic 3), the reproduction of some of his key works, the apparent commodification, also in 2012, of some of his messages through the manufacture of a number of so-called "art bags", the organisation, in 2013, of workshops designed for students and together with students, with the aim of re-contextualising certain specific works, as well as of his entire artistic practice, the organisation of projects in the public space of Iaşi. This body of institutional actions may be interpreted as a structured reaction that aims to showcase Cezar Lăzărescu's artistic work in a historically adequate manner.

Worth mentioning is the decision to include in this volume the curatorial texts signed by the students who took part in the workshop Gradul 0 al Vizualizării. Atelier de Design Expoziţional (Visuality degree 0. Exhibition design workshop). Starting from the exhibition Cezar Lăzărescu put on at tranzit.ro/ Iaşi, the students developed new curatorial proposals – some of them quite bold – in cooperation with the artist himself and under the guidance of Oana Nae.

Together with the artist, we decided to also include in this volume a fictional conversation that takes place in the year 2024, between 1+1 as the artistic producer of the work "BB+" and the representative of an advertising company, which, despite the fact that it had a contract for delivering mobile billboard advertising services, refuses, on political grounds, to honour the agreement. What is emblematic for the way Cezar Lăzărescu operates as an artist in society is first the reaction of self-censorship displayed by the company and secondly the belief that art cannot act politically: "[…] Well, that’s why my colleague asked you about the purpose of this campaign and you said: contemporary art. It is NOT contemporary art! You may ask anyone you wish! Absolutely anyone!... It is not!"

Cristinei David's volume "Falsuri" ("Fakes") brings together her professional correspondence from the period she spent as a resident at tranzit.ro/ Iaşi; this residency opened a new chapter capitol of artistic residencies in the city of Iaşi. The decision to invite Cristina David was made, paradoxically, immediately after her application (which at the time bore the title "Another Kind of Applications / Altfel de Aplicaţii"), designed on purpose as a response to the AiR MQ 2013 call for applications made by tranzit.ro and the ERSTE Foundation, had been rejected.

Being interested in the apparent democratic openness of project calls ("call openness") in today's domain of contemporary art, tranzit.ro/ Iaşi attempts to challenge this practice, be it its own or as applied by other organisations in the art sector. There have been occasions in which, while taking part in similar actions, we have felt a certain responsibility for the sometimes undeclared subjectivity of such selection processes.

As many of us would agree, an application is the place where so many variables meet, a place where the artist may create expectations that are tailored specifically for a specific place, an institution or a profile, that they build, by themselves, another work of art; a work of art that is ephemeral, that is not taken into consideration and that operates for an extremely short period of time between the artist as applicant and the institution that has generated the call. Cristina's idea, to publish her applications from a certain period of time by collecting them in the shape of a book, seemed very valuable to us and caused us to decide to produce it at tranzit.ro/ Iaşi.

Cristina David's applications are made according to a methodology that seems to aim to find out as precisely as possible the needs of those who commission this closed-circuit piece of work – the application –, almost always exaggerating the artistic offer. Sometimes, the fictionalization of applications crosses into the realm of magic realism, such as the offer to walk on water as part of a performance. Other times, the introduction phrase, already commonplace in rejection e-mails – "Your application is outstanding, but..." – is read with so much conviction, that the artist, based on the statement that her application is indeed outstanding, decides to offer her artistic production for free. The exchange creates thus a very precise, tough negotiation territory, unaffected by gratuitous courtesy.

The mechanics of this project's evolution becomes even more interesting if we bear in mind the fact that it became possible through a sequence of successive applications: an application about applications was rejected, it subsequently became the grounds for an invitation for an artistic residency, during which no less than 17 other applications were written. The sequence culminated with the application made by tranzit.ro/ Iaşi to the Iaşi County Council, the result of which was the financial support for the publication of this book: Carte de artist: Cristina DAVID / Cezar LĂZĂRESCU (Artist's book: Cristina DAVID / Cezar LĂZĂRESCU).
text by Livia Pancu și Florin Bobu 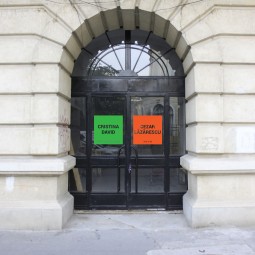