tranzit.ro/ Iași is opening this autumn with a presentation realized from the perspective of the traveler to the 14th International Architecture Biennale in Venice. The invitation towards the two guests was inspired by the novel ”The storyteller” (El Hablador, 1987) of the Peruan writer Mario Vargas Llosa in which the main character Saul Zuratas travels in the diffuse territory of a dispersed community and succeeds through his stories to function as a binder in the structure of the collective memory of that community.

Delia Bulgaru (b. 1986) has a master degree in Mural Art from the Faculty of Visual Arts and Design in Iași, Romania. Since 2010, she is a founding and an active member of SATellite Group (Social Artistic Tendency) togheter with Andrei Timofte and Alex Tărnăuceanu, a group whose artistic practice is often participatory and aims to research on the local or extended socio-political context.
Since 2014 she is part of the tranzit.ro/ Iași team and a member of Vector Association Iași.
Her artworks include multimedia installations, mural painting, and she is interested in investigating the circulation of the media flux through sociological methods.

Andrei Pripasu (born in 1987) is a young architect, although "architect" is only meant to be the answer he gives out of commodity when people ask him "what do you do for a living?". In fact he finds one word answer to this question overly simplistic and pointless, as one person cannot be defined by one incidental professional path he has chosen at some point during his life. The truth is he has thought very often to find some better thing to do for a living. Growing up in a city like Iași, he is aware that his way of seeing the world was shaped by the defining traits of the post-socialist city: immunity towards ugliness, and the passive embracing of the status quo. The conflict between public and private is what he finds to stand at the base of many problems of our society, and this very conflict is key in his view upon what architecture should try to work on. His relationship with contemporary art is mostly driven by curiosity, and his position towards it is sometimes one of a tacit, if not skeptical, observer. 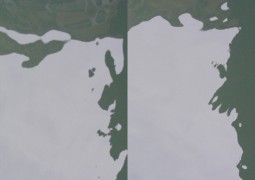