tranzit.at & tranzit.ro/ Bucureşti invite you to the launch of the book:

Ion Grigorescu is one of the seminal visual artists of his generation in Eastern Europe. In recent years, his complex body of work has been attracting increasing attention in the West, entailing a reading of his oeuvre through the prism of canonized Western art histories. This first English edition of his diaries from the crucial years 1970 to 1975 is a small literary and art historical sensation.

In poetic language full of powerfully pictorial metaphors, Grigorescu reflects on his observations of the tension between the realistic effects of the image, the suppression of realism, and the hidden traces the gaze holds through the activities of the increasingly present unconscious of collective memory. Along with the drawings, paintings, photographs and sketches that accompany them, the diaries serve as an introduction that opens up the possibility of conceiving Ion Grigorescu’s art as a rare evocation of a singular way of thinking: a stance.

The book will be introduced by its editors, Georg Schöllhammer and Andreiana Mihail.
“The Man with a Single Camera”, another volume on the work of Ion Grigorescu, published in 2013 by Sternberg Press with Asociația pepluspatru, ERSTE Foundation and Kontakt. Art Collection will be shortly presented by its editor, Alina Şerban. The evening will be concluded with a conversation with Ion Grigorescu. 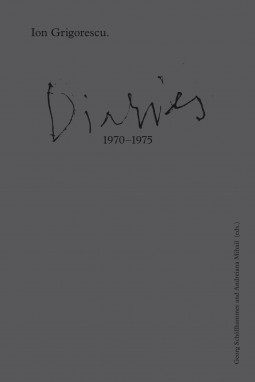