Book launch and open discussion: Which side are you on?

After the book launch, there will be a discussion moderated by the members of the CriticAtac online editorial on the theme Which side are you on?


After months of protests in which most of the observers and of the participants still refused to recognize a potential anti-capitalist movement, after tens of public delimitations and retractions from any articulated critique of the ongoing economic injustice, perhaps the shortest way to revive and coagulate the left would consist in identifying our common enemies.

Too many progressists end caught up in primitive refrains on the necessary and urgent civilizing of the people, too many ngo-activists, public moralists, private politicians and think-tanking lobbyists suffocate any form of exposure and denunciation of the continuous capitalist aggression of the last decades.

Perhaps it is time, then, to ask, as the late Pete Seeger did: Which side are you on?

Costi Rogozanu was born in 1977. He graduated "Union Highschool" in Focșani, computer science. He graduated Faculty of Letters of University of Bucharest. He published in Romania the critical volume Agresiuni, digresiuni (2006) and the collection of short stories Fuck the cool Spune-mi o poveste (2007). He coordinated together with Ciprian Siula, Vasile Ernu and Ovidiu Ţichindeleanu the anthology Iluzia anticomunismului, published by Cartier publishing house.

Vasile Ernu was born in USSR in 1971. He graduated from the Faculty of Philosophy (University AI. Cuza, Iași, 1996) and the Master of Philosophy (Babes-Bolyai University, Cluj, 1997). He was the founder editor of the journal Philosophy & Stuff and associate editor of the magazine IDEA arts + society. His first volume Născut în URSS (Polirom 2006, 2007, 2010) was translated into several languages. In 2009 he publishes at Polirom the volume Ultimii eretici ai Imperiului. Along with Costi Rogozanu, Ciprian Siula and Ovidiu Ţichindeleanu, he is the coordinator of the volume Iluzia anticomunismului, Cartier Publishing House 2008. 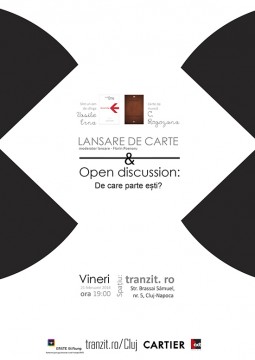