This Thursday, tranzit.ro/ Iaşi welcomes you to a presentation by Mircea Nicolae. Invited to discuss in detail about the becoming, the trajectory and the life after display of a project of his choice, the artist opted for the project Romanian Kiosk Company.

“Romanian Kiosk Company is an installation made out of four objects and a one hour film. The main intention of the project is to explain the recent history of Bucharest through the street kiosks. Temporary architecture objects, these kiosks found their way in communist times and during the transition phases, achieving forms, functions and legal statuses proper to each historical period.
In 2010 mainly the communist kiosk, but also the transition ones were dumped to junk. They were replaced with new ones, built according to the legal and architectural regulations adopted by the City Hall.
I wanted to overpass the sterile narration linked with the history of this type of architecture. This is how I ended up building a biographic fiction which would be able to explain the story of the city of Bucharest starting with 1950 and starting from a human level. One family of Romanians is living through communism and the transition period recording in their life experiences the impact of the general historical events that are shaping both their lives and the kiosks that they are building.
Thus, this film is a mixture of family story, socio - historical events and the history of recent architecture.” (Mircea Nicolae)

Mircea Nicolae was born in 1980 in Curtea de Argeş. In 2002 he graduated from the “Faculty of Letters” in Bucharest with a degree thesis on the House of the People. In 2003 he got an MA in Space Anthropology organized by “Ion Mincu” University of Architecture and Urbanism from Bucharest.
Between 2007 and 2009 he made 100 interventions in abandoned spaces, in public and private spaces. In 2010 he was nominated for the international prize Future Generation Art Prize and he won one of the prizes. In 2011, his project Romanian Kiosk Company was presented in the frame of a colateral event during the Venice Biennale.
Mircea Nicolae lives and works in Bucharest.
http://mirceanicolae.ro/ 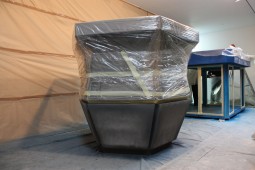