tranzit.ro/ Cluj - Social Forum Cluj-Napoca: The Commons of the Left

Social Forum: The Commons of the Left

We invite you to Cluj, between 24-26 May 2013, to discuss about our collective and individual activists struggles carried out in different arenas and around multiple issues. Our emancipatory projects are related to fundamental aspects for us as individuals and for our collective survival and dignity. We want a just world, in which issues of living in society can be politicized, transformed and negotiated collectively. Authority over the structure of the social fabric is to be held collectively. While we may prioritize differently what the central issues or the central node of emancipation are, our strength is that we can see them as interrelated. Even if not always explicitly, we carry these fights together.

We invite all individuals and groups who identify themselves with the independent left to find a common way of organizing that would allow our differences to enrich and grow in complexity, while our struggles remain common.

The aims of the forum are:

- To discuss the fundamental and commonly shared principles that will form the basis of our networking;
- To map the ways in which we operate, communicate our actions and make our ideas and struggles visible;
- To find ways to bring together the messages of these struggles onto a common space of expression and to imagine democratic federative ways of organizing.

We open for discussion an initial formulation of the fundamental principles of this federation, which resulted from a collective effort. These principles were not derived a priori, but we tried their formulation by observing our society's problems on the one hand and the public statements expressed by the independent Romanian left, on the other hand. Moreover, even if each of us would rather emphasize one or another of the principles, we want these to work inside the platform in an inclusive manner, in the sense that we all recognize all these principles and reclaim them equally, because we are convinced that only together they can constitute a filter to provide a truly progressive orientation.

Please confirm your attendance by sending an email to forumsocialcluj@gmail.com until May 20th.

The Social Forum Cluj-Napoca is organized by European Alternatives Cluj, tranzit.ro/ Cluj and the Group for social Action(Cluj), together with a group of activists, publicists and academicians from Cluj. 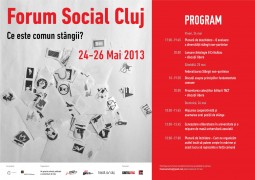