This Friday, tranzit.ro/ Iaşi invites for a dialogue the artist Dan Acostioaei and Bogdan Chelariu, PhD researcher in Social-Political sciences at University “Alexandru Ioan Cuza”, Iaşi. tranzit.ro/ Iaşi’s intention is to continue the discussion regarding the practices of some art institutions to commission new contemporary art works.
The dialogue will analyze this practice in a local and international context, taking as a study case Dan Acostioaei’s project “Trial”. The discussion resumes on the theme of the unrealized projects that are often re-evaluated by artists and whose materialization may happen by activating their artistic network. Thus, the artist becomes his/her own agent of promotion.

Recently, “Trial” was showed between October 3rd and November 11th in the frame of F.A.K. 2012 exhibitions series at the Förderverein Aktuelle Kunst Münster, Germany. This series was curated by Olivia Fuhrich, Elena Höckmann, Anna Katz and Marijke Lukowicz. The project contains two main elements: a fake documentary (2 video works) and a publication. At Münster, “Trial” took the form of an installation that reminds of a mise en scene of the events from December 25th, 1989.

Dan Acostioaei lives and works in Iaşi, Romania. He is a visual artist and he holds a teaching position at University of Arts”George Enescu” in Iaşi. His works focus on the identity models of the Romanian society in transition and on the ideological boundaries between the economic sphere and the conditions of artistic production within former Eastern Bloc. His artistic projects were part of group exhibitions such as One Sixth of the Earth - Ecologies of Image, MUSAC, Leon, Spain (2012), Transitland: videoart in Central and Eastern Europe 1989-2009, Museo Nacional Centro de Arte Reina Sofia, Madrid, Spain (2010), Illuminations, Level 2 Gallery, Tate Modern, London, UK (2007).

Bodgan Chelariu, Social-Political Sciences Phd at University “Alexandru Ioan Cuza”, Iasi, where he took on a research about the anti-majority effects of constitutions, electoral laws and human geography. He graduated BA and MA in Iasi, Bergen and Oslo. Together with friends he initiated, activated and left behind: fanzines (NegruSubteran/ UndergroungBlack), direct actions (FoodnotBombs) and associative groups (ongamas.ro) He was a member of indymedia. He got a taste for lettrism, dadaism and situationism while working in the Tatarasi Atheneum team, and also finalized his BA with a thesis on “Political and Cultural Perspectives of the 1968 Events” (Lumen Publishing House, 2009).


At the same time, we kindly remind you that in the gallery space of tranzit.ro/ Iasi, you can still see until the 25th of November 2012, the exhibition: TEACH ME PET ME featuring works by: Andrea Faciu, Eleni Kamma, Rachel Koolen, Nono Pessoa and George Doroş. 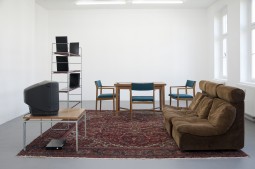