This Friday, tranzit.ro/ Iasi invites for a dialogue the artist Matei Bejenaru and the art critic and theoretician Cristian Nae. Tranzit.ro/ Iasi intention is to initiate a discussion regarding the practices of some art institutions to commission new contemporary art works from artists selected by the respective institutions. The dialogue will analyze this practice in a local and international context, taking as a study case the project On beauty: building a darkroom…

Following a call for projects organized in 2011 by the Kettle’s Yard Art Center from Cambridge, the Iasi-based artist Matei Bejenaru was selected, alongside Matthew Darbyshire, Lorna Macintyre and Jeremy Millar to produce a personal project in the frame of 2012-2013 Associate Artist Program.

This is my technologically "delayed" project, through which I aim to utopically reclaim an obsolete technological platform, a project whose beauty and formal expression has its roots in the nobility, refinement and generosity of Jim Ede's lifetime project. Another poetic aspect of the project consists in the fact that an artist coming from the East, from a country without a technological tradition would build a "delayed" technological platform in the birth country of the industrial revolution, donating the equipment that has helped him take the first steps in
photography. Thus, the classical technological transfer from the West to the East is reversed in a metaphorical one, from the East to the West. (Matei Bejenaru, 2011)

The discussion will consider topics such as intercultural translation (also regarded as inter-media practice) and decoloniality, the technological aspects of modernity and its temporal regimes (starting from the assumption of multiple modernities, with different speeds, vectors and stages of development) and the relational character of the artistic object (as opposed to its exhibition value and commodity fetishism). Last, but not least, it will touch upon the situation of the artist as a performer and the existential dimension assumed by this project, a topic which allows us to reflect on the formation of contemporary artists in Romania, their relations with the dynamics of international art, as well as on the critical pedagogical dimension of this art project, inscribed in the larger context of the "educational turn" in contemporary art. (Cristian Nae, 2012).

Matei Bejenaru, visual artist that lives and works in Iasi, is teaching photography and video-art at “George Enescu” University of Art. He is founding member of Vector Association in Iasi and director of the Periferic Contemporary Art Biennial (1997-2008). He participated, among others, to group exhibitions at Level 2 Gallery, Tate Modern, London (2007) and Taipei Biennial (2008). Between November 2010 and July 2011, his experimental project for choral music Songs for a better future was shown in London at The Drawing Room and Tate Modern (Turbine Hall), Vancouver at Western Front, Kunstlerhaus Buchsenhausen, Innsbruck. Between 2011 and 2012, Matei Bejenaru was guest teacher at Université du Québec à Montréal. Starting 2012, he is associate artist at the Kettle’s Yard Art center, Cambridge, Great Britain.

Cristian Nae is an art critic and theorist, currently working as Ph.D. lecturer at G. Enescu University of Arts in Iasi. He is a former NEC and Getty-NEC fellow of "New Europe College" Institute of Advanced Studies in Bucharest and a postdoctoral researcher at UAGE Iasi. He is also a former editor of Vector Magazine (2006-2008) and he is collaborating with several journals and reviews (such as IDEA, ARTA, Artmargins). He is interested in aesthetics, contemporary art history (especially in Eastern Europe) cultural and visual studies.


At the same time we remind you that in the gallery space of tranzit.ro/ Iasi, you can still see until the 25th of November 2012, the exhibition: TEACH ME PET ME featuring works by: Andrea Faciu, Eleni Kamma, Rachel Koolen, Nono Pessoa and George Doroş. 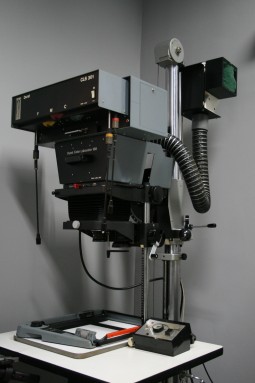 © Matei Bejenaru, Image of my Durst 138 professional enlarger, bought in March 2007 from a former photo studio in Iasi, 2012