11 June - 18:00h - lecture and screening
Attempting to respond to a series of questions around artistic practice and its relationship to the rhetoric of local politics, the Canadian curator Jesse McKee will offer a public lecture based on a case study set in Vancouver in the late 1960s and 1970s. This lecture will focus on the history of the Intermedia collective and its subsequent division because of political and aesthetic concerns. As one result of this separation, two institutions were founded: Video In | Video Out and Western Front. Looking at the history of these two spaces “we see outdated political ambitions reduced to an image of a historical moment. Inversely, the playful aesthetics within a historical moment become political in their form, from a contemporary perspective.” (Jesse McKee).

The lecture will conclude with a screening of a recent video and text work by Montreal based artist, Sophie Bélair Clement: Narrative performances while watching a silent version of INTERMEDIA HISTORY, Glenn Lewis / Robert Filliou (1973), 3⁄4 inch tape transferred to DVD by VIVO, 61 minutes, 2011. Performed by Eric Metcalfe, Glenn Lewis, Paul Wong, Ed Varney and Vincent Trasov & Michael Morris. Narrations transcribed and animated for monitors (2011).
The work deals with the historicization of this moment and how it is perceived today by the artists who were implicated in these activities at the time.

The launch of tranzit.ro in Iaşi is also the moment of initiating a new institutional practice: Propaganda Trips. The trips in the city will function as a service offered by tranzit.ro/ Iaşi to the artists, curators, activists or cultural workers. This service of an intimate character tries to counter the practices according to which between an art institution and an artist or curator only predefined exchanges exist. During the walks, the character of self-understood reciprocity that usually comes with these collaborations (the promise of a future collaboration) is annulled, making place for another type of production, which is immaterial, unregulated and unplanned. The first participants to be offered these trips, on the 12th of June are artists Anca Benera, Arnold Estefan and Cezar Lăzărescu, as well as curator Jesse McKee.
Propaganda Trips were initiated by Matei Bejenaru, director of Periferic Biennial, as a way of presenting the local context for the different (national and international) artists invited to Iaşi for the biennial (1997-2008). 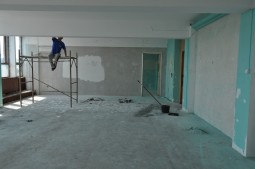