An intervention part of The Last Archive series

21 December 2021, 3-5 p.m.
An intervention on the land of the Experimental Station for Research on Art and Life, in the village Siliștea Snagovului, Ilfov county

Coordinates: https://goo.gl/maps/JQMtN2spqm3iiXMHA
Access: by car via DN1 or A3; by bus no. 446, departure from Piața Presei Libere, arrival at Pescari stop

Before humans start developing their activities on the territory of the Research Station, artist Adrian Ganea installs here a series of objects meant to provide food for the birds around, drawing the attention to the species we will cohabit with and bringing a thank-offering for the technical and artistic inspiration that birds gave to people throughout time. Strange but also functional objects, the works signal a field onto which apparently nothing happens. They redirect the gaze to the living beings in the sky, and more abstractly, to the cosmos, indicating a time outside duration, in which art reflects the superior order of species’ coexistence.

“For this project I was interested mostly in the cosmists’ existential drive once the dream of immortality for all life forms has been accomplished, what Nikolai Fedorov calls the common task. Beyond preserving life in all its forms, the cosmist ideas propose extending knowledge towards all life forms through art. Thus, beyond the necessary for survival, knowledge becomes a sort of food that can be transmitted to the other species. The work I propose wants to represent both nourishment that supports life, as well as an aesthetic offering for the flying species that are co-inhabiting this space in Siliștea Snagovului.

If we look at Constantin Brancusi’s Bird in Space sculpture from 1923 from a cosmist perspective in which art and science converge, this aerodynamic metallic bird appears as if it could travel to space. If we saw it coming to life in a cosmist project, this flying object would be integrated in the totality of the living cosmos, feeding on the resources of the cosmos and on knowledge, and our gaze percevieng it for a hundred years horizontally, as a displayed aesthetic object, would be forced to relate to the vertical that the sculpture aspires to in its gesture.

It was also in 1923 that Kazimir Malevich started to work on a series of sculptures called Arkhitektons, which were prototypes for space stations. They were meant to contain at freezing temperature and in zero-gravity human bodies that were to be resurrected. Realised on a reduced scale, we could imagine these architectural sculptures to host birds rather than people, as they even presented circular entries such as the ones of nest boxes.

I’m interested in the relations between species and to the incredible knowledge that birds offered us, which was often translated through aesthetic means. This relation corresponds to certain cosmist ideas and I consider it relevant in post-apocalyptic times.” (Adrian Ganea)

The intervention realised by invited artist Adrian Ganea takes place on a territory that is still to be defined, of the Experimental Station for Research on Art and Life. Here his works (sculptures-objects) are not only exhibited but exposed: with an open field as frame, without any pre-existent reception setting, in the middle of the winter, where they will resist maybe for a day, maybe for several months. Yet, since the apocalypse has already taken place, they appear as a projection to and from the future, materialising the necessary gestures one needs in order to respond to this future: courage and generosity.

Born in Târgu-Mureș in 1989, Adrian Ganea is an artist whose practice varies from theatre stage design to sculpture and 3D animations. He works mostly in the field of performing arts, being interested in particular in the digital culture. He is interested in the ways in which different forms of fiction materialize through the subjectivity of technologies. He composes his works with the attempt to create liminal spaces building props from green screen, digital worlds and simulations in which the border between the intangible and the material becomes ambiguous.

The Last Archive is an artistic project initiated by the visual artist Vlad Basalici and enacted together with curator Raluca Voinea as part of the programme of the contemporary art centre tranzit.ro/București. In 2012, Vlad Basalici collected newspapers printed on the 21st of December of that year, the last day before what should have been the Apocalypse presumably announced by the Maya civilization, with this event and the news published about it constituting the basis of The Last Archive.
Starting with 2013, a series of artists were invited to propose an exhibition reflecting on the material of this Archive. Péter Szabó, Monotremu, Giles Eldridge, Vilmos Koter, Kiki Mihuță, Maria Baroncea and Anca Bucur are the artists who enlarged the concept of The Last Archive, through the realisation of a project-exhibition, inaugurated each year on the 21st of December, in the space where tranzit.ro/București activated between 2012-2019.

The Last Archive project from 2020, 2012 Alphabet Book, took place in the virtual space and can be seen here: https://vimeo.com/manage/showcases/8902771/info.

For more information you can write to: raluca.voinea@tranzit.org. 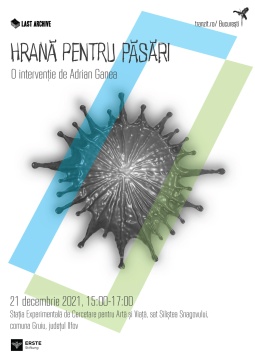