The Veil of Peace

"In the iconography of real-existing socialism, peace reigns supreme over all symbols. Even more than the peace dove, drawn by the hand of each and every child of the former socialist bloc, the word 'peace' itself, as in 'peace amongst peoples', is a word that became image. Peace was the ultimate symbol of communist life. Yet the 'Free World' kept on seeing in the communist peace only a veil, behind which lurked other intentions. After the curtain was opened, from the wars of former Yugoslavia at the beginning of the post-socialist transition, to the war of Ukraine at the end of it, the former socialist bloc has become a 'conflict region', and thus was reintegrated into the world of capitalism and coloniality. Peace itself has disappeared from the social life under the distress of wars, crises, and infinite austerity. The veil of peace has been replaced by the armors of war. How can we dematerialize war, to regain the peaceful time, how can we start redistributing the capital of the image back into common meaning?" (Ovidiu Țichindeleanu)

“The Veil of Peace” exhibition is a first chapter of a research dedicated to the peace iconography during the socialist period in Romania and Moldova. The international circulation of the peace motif, especially in the non-aligned countries, the permanence of its presence in the official discourse during the post-war period, until the end of the 1980s, as well as the multitude of its representations in all the cultural forms (fine arts, film, literature, journalism, music, philately, festivals) represent points of departure and directions onto which the “Veil of Peace” project founds its research.

In the exhibition at the tranzit.ro/ București space one can find works borrowed from the collections of museums in the country, a programme of films and news journals from the National Film Archive as well as a section with archive materials and documentation, defining a work in progress and open project. Among the exhibited artists one can find: Natalia Matei-Teodorescu, Hortensia Masichievici, Mihai Rusu, Ladislau Feszt, Gheorghe Terescenco, Mihai Leonte, Ion Popescu Gopo, Luminița Cazacu and others. Artist Marc Verlan has realized especially for the exhibition a work interpreting the painting “Friendship” (1974) of Moldovan artist Valentina Rusu-Ciobanu, which was the starting point from where the concept of “The Veil of Peace” started to develop, in February 2015 in Chisinau.

Institutions such as Württembergischer Kunstverein Stuttgart, Schirn Kunsthalle Frankfurt or San Sebastian European Cultural Capital have recently opened or are about to open exhibitions dedicated to peace. The news flow we are receiving daily assures us that, unfortunately, this topic does not belong only to the aesthetic field and that the imperative of peace is more actual than ever. “The Veil of Peace” exhibition opens a case filled with images, symbols and slogans that were locked together with other relics of the socialist regime, all labelled as “propaganda”. The curators of this exhibition, reunited under the name “The Resurrection Committee”, are attempting at shaking the dust from the emancipating concepts that were once proposed to an entire world and which are today covered by the veil of forgetfulness.

During the exhibition, a series of educational workshops for children will be realized, coordinated by Daniela Pălimariu/ ArtCrowd Association. 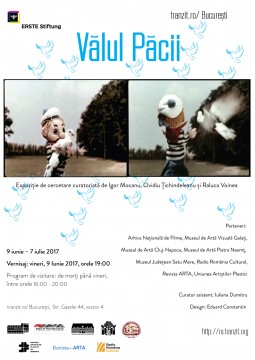