Our Life, Our Story, Our Home

“At the beginning of 2021, I got invited by my friend Dieuwertje Hehewerth to attend and be a part of an ongoing exhibition in Plǝt, her living room gallery in Amsterdam. The last show before she would sell her apartment and leave the country. The exhibition would be a layering of works added by her friends week after week. There would be a newsletter accompanying the works, but no photographic documentation. Naturally, given my contrary nature, the only thing I wanted to contribute was photographing her entire home. I hoped to give equal importance to every corner of it, rather than just to the artworks on display. I chose 5 films, for the 5 rooms: kitchen, bathroom, living room, bedroom, toilet. The images I made were shot on black and white film. I learned to develop them, with outside help. I made prints in the form of postcards, and mailed them to Dee when she moved back to New Zeeland.

The exercise could have stopped there, but Dee decided to mail the postcards, one by one, over a hundred of them, from New Zeeland to Paris, to L’Alcove, another space she was invited to exhibit in, at the request of her friend Clément Gagliano.

I went to Paris, I photographed L’Alcove, this time in color, and once invited to Paris Viitorului by Raluca Popa, I decided to take the work there, it seemed like the natural thing to do.

The work is ultimately an exercise in folding one space into another through the medium of photography. The spaces: a one-bedroom apartment in Amsterdam, a one-bedroom apartment in Paris, and now a gallery space in transition in the heart of Bucharest. The tools: analog film, black and white, color, then slide. The attempts: mapping space and flattening out the importance of art objects. But in reality, the work is also an exercise in linking friendships.

And with that, I’d also like to thank Jelle Baars (for the initial film development assistance), Carmen Gray (for accidentally teaching me to develop C-41), and Ana-Maria Gușu for the printing and postcards.

Alina Lupu is a Romanian-born and bred, Dutch-based post-conceptual artist and writer. The focus of her practice is on precarious living and working conditions for art workers and laborers in general. She is a recent board member of Platform BK, where she strives to improve the position of (international) art workers and to stimulate the public debate on the role of visual art in society. She released a publication entitled “This is a Work of Fiction”. The novella goes through real and imagined situations touching upon the fragility of the artistic profession and the many compromises that one is subjected to along the way when embarking on it. Her work has infiltrated: Kunsthuis Syb, Beetsterzwaag; W139, Amsterdam; Onomatopee, Eindhoven; Drugo More, Rijeka; Rheum Room, Basel; European Lab, Lyon and Diskurs, Giessen, and Deliveroo, Foodora, Thuizbezorged, UberEats and Helpling, among others.
Website: https://theofficeofalinalupu.com/
Linktree: https://linktr.ee/theofficeofalinalupu


The project takes place in a new space, Paris Viitorului, on Mihai Eminescu Street (corner with Viitorului Street), sector 2, Bucharest, as well as in the neighbourhood around.

For Alina Lupu’s exhibition, the students involved are Natalia Andronachi, from the Centre of Excellence for the Study of Image and Corina Ștefania Mitincu, from the Arts University in Bucharest.
The project’s team: Raluca Popa, Raluca Voinea, Iuliana Dumitru, Edi Constantin 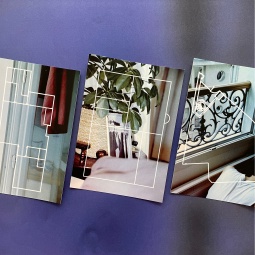