“Crimes are abolished. Only passions remain.” is a project developed over six weeks in Paris Viitorului space, and presents a succession of six exhibitions with the following artists: Claudiu Cobilanschi (20 - 26 September), Ioana Gheorghiu (27 September - 3 October), Andrei Dinu (4 - 10 October), Ioana Stanca (11 - 17 October), Adelina Ivan (18 - 24 October), Alina Lupu (25 - 31 October).
The second exhibition will open on the 28th of September 2021, from 5 to 8 p.m. and will present works by Ioana Gheorghiu.

In fact, an instrument

An inventory of innuendos to sound – drawings and objects speculating the elongation in the markings of what seems to be a hybrid field, meant to accommodate more types of sports: a circle has the tendency to become an oval, bearing shapes of ancient Olympic stadiums and principles for musical composition.

Things that were found: out of date sound storage, covers for sound storage still in use, fragments of songs and principles of composition, sounds too rare to be recorded.

Elongation – breathing movement that increases the volume of the organ, creating a space that did not exist before. The space gains flexibility towards a possibility. Even after it is absorbed, this possibility remains instilled in its future capacity to expand again.

The material is part of a project developed in cycles over the course of several years and it is looking for consensus within the space of Paris Viitorului. The material and the space seem to share elongation as logic of formation – two overlapping lines breathe to become a triangle: a slit of hope in the midst of coffee shops, flower shops, tourism agencies, empty expensive places, white cubes.

Ioana Gheorghiu crosses the temporal modalities of performance using text and instruments from the visual arts to operate in the interstices between language, sound and body.
She works with drawing, video and action, approaching conceptually governing principles from urbanism, music, sport. She deals in poetic-concrete ways with unjust cases for animals or birds. She uses formats such as the debate (a performative frame inspired by the academic debate competitions) or musical scores.

The exhibition can be visited from Wed. to Sat. from 3 p.m. to 7 p.m.
In complementarity to the exhibitions that are part of the project “Crimes are abolished. Only passions remain.” there will take place dialogue sessions with students of the the Arts University in Bucharest and of the Centre of Excellence for the Study of Image, as well as a series of urban walks in the neighbourhoods around the space, guided by specialists from different fields.

For Ioana Gheorghiu's exhibition, the students involved are Sandra Sankat, from the MA in "Theatre, Multimedia, Society" at the Centre of Excellence for the Study of Image and Adrian Conete, in his 3rd year of study for a BA in Photo-Video at the Arts University in Bucharest. 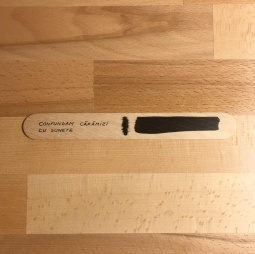