FOOTBALL. REALISM OF THE GAME

Imagine you are at a football match where you don’t follow the ball, but a single player. Or only the coaches. Or you find yourself paying homage to the referees. Imagine how during that game you only follow the gestures and the tension between the galleries. Or imagine that either the ball or the players take turns disappearing. Imagine the positions of the players are, in fact, political move(ment)s. Or the supporters become one and the same with the heraldry they support.
The CORNER team stages an exhibition where the complexity of a football game and of the stadium is reconstructed through artistic interpretations belonging to visual, conceptual and performance art, cinematography, sound art, documentation and other hybrid forms such as tours of cultural and sports objectives. This way, players, referees, coaches, supporters, as well as the conventions or rituals of the football game are imagined in a sports hall, tracing the interpretation of the stadium space which represents them, but also the relations between them, searching for the formation of new meanings. The stadium is interpreted as a green cube, a stage where the spectacle has the underlayer of a continuous fight for power, capital and image; here is the place where identities are defined and cultures are born.

The exhibition comprises works published in the CORNER magazine, works commissioned for the exhibitions, photographic archives, works found in museums and private collections and many more.

For our project, the historical building Floreasca Sports Hall / „Lucian Grigorescu” plays a significant role in implementing the concept of stadium imaginary reconstruction in a contemporary art exhibition. 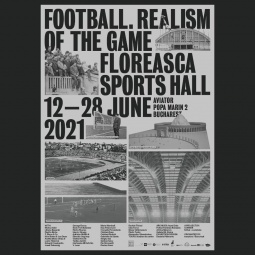