COMPETING NARRATIVES EXHIBITION was realised following the research of the written media from 1990 to 2000 in Romania. The research was made by the Iaşi based historians: MARIUS ALEXANDRU DAN and ALEXANDRU ŢÎRDEA.

“We start here from the assumption that the current socio-political divides in Romanian society have their roots in the events taking place in the 1990s. Unlike in the case of Hungary, Poland and Czechoslovakia, which had developed the rudiments of a civil society in the end period of their respective communist regimes’ rule, including with the participation of local communist party members, fact that allowed a peaceful transfer of power and an organisation of the new political scene in the terms agreed by said civil society, in Romania’s case these steps towards the coagulation of a civil society were only possible after the 1989 Revolution, and this lent the local political discourse a number of specific features: partisanship, verbal violence, symbolic violence, turning the public sphere into a battlefield. These characteristics have survived until today, and the division of society continues to be determined by the same parameters established at the time of the “Piața Universității phenomenon”. (Marius Alexandru Dan and Alexandru Tîrdea, 2018)

The COMPETING NARRATIVES project is organized by 1 + 1 in collaboration with tranzit.ro/ Iasi and co-financed by the National Cultural Fund Administration. The project does not necessarily represent the position of the National Cultural Fund Administration. AFCN is not responsible for the content of the project or the way the project results can be used. This is entirely the responsibility of the beneficiary of the funding.
Project participants: Marius Alexandru DAN, Manuel MIREANU, Florin POENARU, Vahida RAMUJKIC, Ana SZEL, Alexandru ŢIRDEA.

All public presentations will be shortly available at www.videostream.ro 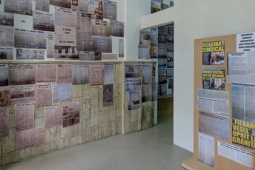