PERETELE DE CALCIU AL UNUI MIC-BURGHEZ (THE CEMENT PLASTER FINISH WALL OF A PETIT BOURGEOIS) is an artistic intervention consisting in the application of a white, glittery, small-grain cement plaster finish (known in Romanian in familiar terms as “calciu”) in a room belonging to the mural art department of the Faculty of Art at UAGE Iași, as well as in the project space of al tranzit.ro/ Iași.

The history of this type of rendering continued after 1990, when it was associated with the times and the ideological rhetoric used before 1989, and therefore quickly pushed out of the way. Some of the “winners” of the transition period are those who had the financial means to refurbish and “modernize” their living space. The economic dynamics of the transition period generated a process through which this type of interior decoration became a genuine “class marker”, as it indicated precisely that social stratum that was lacing the economic, social or cultural means (the poor, those who had ended up living on their own, he elderly and/or those with only a minimal formal education) that would have allowed them to refurbish their living space according to the new requirements and aspirations of the Romanian society, now in the middle of capitalist ascension.

The exhibition PERETELE DE CALCIU AL UNUI MIC-BURGHEZ (The Cement Plaster Finish Wall of a Petit Bourgeois) is part of the project NARAŢIUNI CONCURENTE (Competing Narratives) is organised by 1+1 in collaboration with tranzit.ro/ Iași and co-funded by the Administration of the National Cultural Fund. This project does not necessarily represent the position of The Administration of the National Cultural Fund. AFCN is not responsible for the content of the project or how project results can be used. These are entirely the responsibility of the beneficiary of the funding. 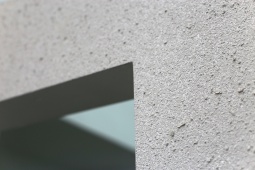