The Last Archive and tranzit.ro/ București invite you to the opening of the exhibition Shadoof.

“The number of Apocalypses announced and awaited starts from 165 and varies according to the source. The Apocalypse is for quite some time no longer a certainty. All of them, however, promise the unique truth. For the pragmatic, the rational, agnostic, atheist, it becomes a reason for entertainment. The phenomenon of the fake news is not a new one. It has been used since the oldest of times to create chaos and mistrust. What differs in the present is technology, which brings the biggest change since the invention of print. Although some believe the way in which technology can be controlled can be a danger, it is rather worrisome the controlling of our minds through informational cascades and propaganda elements. How did we become immune to the truth? Fake or misleading information are replicating with the speed of technology. Conspiracies. Disinformation. Propaganda. Manipulation. We like this kind of entertainment as much as mass media likes to offer it to us. In today’s society, different ideologies are fighting each other. As in all societies that are changing, people are trying to find a balance, despite all. Yet, the feeling of confusion becomes even more overwhelming. Could it be that the only antidote against fake news is our own judgement?” (Kiki Mihuță)

The Romanian title of the exhibition, “Cumpenele lui Kiki”, refers to a word, cumpănă, which in Romanian, along the meaning of a draw beam of a well which shadoof also signifies, has a series of other meanings, such as: balance, water level, divide, indecision, swing, danger, edge etc.

Kiki Mihuță (b. 1984) has graduated from the Arts University in Bucharest. She works with a variety of media, including installation, text, sound and performance and uses her practice as a form of resistance against contemporary society’s norms. Her everyday experiences are treated at the same time as departure point and meditation act. Her works deal with the dichotomy between the self and the other, instinct and rational thinking and are often collaborative.

The exhibitions realized so far within this project, as part of the collaboration with tranzit.ro/ București were Suffering from the Irrational – Vilmos Koter (2016), What Happens if Nothing Happens – Giles Eldridge (2015), Redemption Day – Monotremu (2014) and The Old, the New and the End - Péter Szabó (2013). 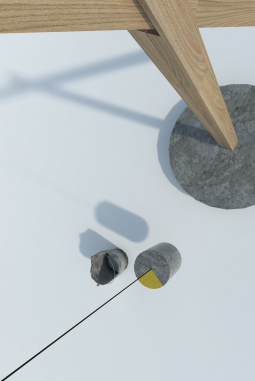