Dialogue with the artist, starting with 7 pm, in the Tranzit Orangery.

Permanent installation in the Tranzit Garden: The Solar Flower

In 2015, for the World Expo in Milan, ambitiously called “Feeding the Planet. Energy for Life”, instead of narrowly submitting to the official theme and filling the pavilion with food or its representations – as other states did, Moldova (en)trusted a contemporary artist to come up with the concept and to work together with the winning team of architects. The artist is Pavel Brăila, who looked at the broader scope of the fair’s thematic and chose to underline the alternative sources of energy and the correspondences between human life and the cosmos. The Solar Flower, a polyhedron of coloured mirrors was placed on the roof of the glass pavilion, rotating and reflecting the light of the sun in the pavilion and around, the free energy thus being shared with everybody. Inside the pavilion, the core work was “JOC. Energy of Life”, a film showing the folkloric dance ensemble from Moldova, Joc [Dance, Play]. Founded in 1945, Joc was one of the most important ensembles in the Soviet Union, having realized over 7000 live performances all over the world. Pavel Brăila made on this occasion the first professional recording of them playing traditional Moldavian dances, edited together and displayed in a 3-channel video-installation. The perfection of the collective synchronization and the explosion of vitality are captured by the camera on a big stage, with no spectators, outside of any folkloric festivity and thus turned almost into abstraction. The dances echo the Russian Ballet as well as the Soviet festivities in which different national cultures were both melted and underlined, while the sounds are the little altered expression of a tradition with reminiscent pagan rituals. In the Expo’s line-up of vain nations’ representations and in a Europe with rampant nationalism, Pavel Brăila managed the performance to highjack a symbol which is usually instrumentalized by hollow traditionalist rhetoric and to give it back to a contemporary regime. “JOC. Energy of Life” is a majestic documentary and at the same time another one in the series of cinematographic monuments that the artist has built for his country, after “Shoes for Europe” and “Chișinău – City Difficult to Pronounce”.

Almost a year after the end of World Expo, the Pavilion of Moldova is still in storage in Milan, although its fate could have been that of being reassembled in Chișinău and transformed into a permanent contemporary art institution.

Until that happens, tranzit.ro/ București presents in premiere in Romania the film JOC. The Energy of Life, as well as a prototype of The Solar Flower, installed in the Tranzit Garden for a longer period of time. On the occasion of the opening, we’ll talk to the artist about varied subjects, from the energy resources of the planet to the bureaucracy of a world exhibition, from documentary cinema to tradition and its uses, from Pavel Brăila’s passion for Moldova to the country’s economic situation in the current global context.

The exhibition can be visited until the 2nd of October:
• Tuesday, Wednesday and Friday from 3 to 7 pm;
• Thursday from 4 to 8 pm;
• or by appointment at the email address: roxana.gibescu@tranzit.org

The exhibition is realized with the support of Samsung Romania. 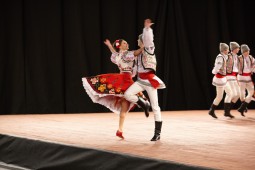