Carmen Acsinte, Olivia Mihălțianu and Raluca Popa have produced for this exhibition new works, starting from the invitation to talk about the city in which they are currently based, Bucharest. While each developing their artistic practices and private lives in different directions, the three artists share a loosely common sensitivity for selecting from the urban experience the frames that resonate with a desired city, seeing it as a place which subjectivities can also construct and not only inhabit.

At the same time, the city that we discover in the exhibition is a projected one, with literary, artistic and cinematographic references delocalizing it. Perhaps the specificity of Bucharest is given by the unlikely juxtapositions of architectural or life-style fragments that resemble other cities, some recognizable and others that never even existed, as well as by the coexistence of different, often clashing temporalities. Bucharest appears in this exhibition as an-other city, one that we contemplate solitarily from the window, that we wish it had some connection to the mythologies surrounding it, a city we see on the cinema screen or read about in history books and mostly, a city we imagine, with fondness but also with irony, with bodily involvement but also with detachment.

Those who are nostalgic of the little Paris will finally have their fantasies fulfilled: they will encounter a Bucharest that is more daring even than Paris ever dreamt, it is the Paris of the future, as J.J. Grandville imagined it in the 19th century, in his style that was both utopian and cynical (W. Benjamin). Raluca Popa finds in Grandville’s book, Un autre monde, the perfect image of another city, into which Bucharest could mirror itself much easier than it does when trying to relate to its fictionalized 1930s.

If, however, the angular, Antiquity-reminiscent and pre-cubist vision of the post-Paris Bucharest makes it hard for you to recognize it as your city, the stop-frames drawn by Carmen Acsinte will surely feel like places you’ve passed by yesterday – only that they resemble street corners or facades that are from other cities, such as Paris, Moscow, Berlin or San Francisco. The artist delivers us a city which looks as precise as an architectural drawing but which in fact reveals the multiple subjective filters through which we are always looking at it.

Olivia Mihălțianu appears as WKW, Winyan Kipanpi Win | The Woman Who Was Waited For, a persona she has used before in other settings and which she is now performing in a chaotic Bucharest, where she is followed by the camera from above, to the street level and down to the asphalt, at the peripheries or through the city centre. The cinematic narrative reminds of action spy films, only that this time the interest lies in the parcours of the character and not in any mission she might have to accomplish.

The exhibition is part of the programme “/ București” through which tranzit. ro/ Bucureşti aims at contributing with artistic perspectives to the current debates on the city of Bucharest, seen in an East-European and global context. 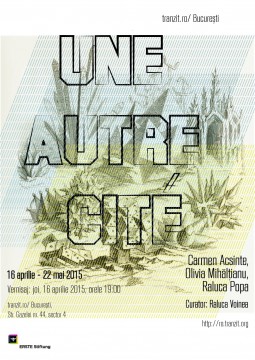