tranzit.ro/ Cluj invites you at the exhibition of

A Vocabulary of Revolutionary Gestures is an on-going investigation into the relationship between revolution and the body, gesture, and movement. At tranzit.ro, I will be showing materials from my on-going work around a video document from the period of revolutionary upheaval in the GDR in 1989: in a scene from the very first meeting of the Central Round Table, the “revolutionary council” of the GDR, a noisy demonstration can be heard approaching down the street outside the meeting hall. For ten minutes, the proceedings inside are put on hold, while participants try to agree on a response… and fail.
While people talk, or strain to listen, faces and restless fingers twitch, a camera pans frantically across the room, a hand plays with a pen or stabs the air, heads turn and nod, swaying wildly back and forth. It is in these physical intensities, not in the spoken word, that the totality of the collective, revolutionary experience makes itself felt as uncontained potentiality.

The work on show at tranzit.ro/ Cluj consists of materials from my ongoing research assembled into a video installation that also serves as a setting for a series of workshop events, where participants are invited to join my experimentation with the material. E.R

Elske Rosenfeld (born in 1974 in Halle/Saale) uses video and performance, as well as different formats of writing, often in constellations of collaboration, to investigate the relationship between specific historical, as well as contemporary scenarios of political upheaval, and their potential for affecting political change. Recent works have focussed on the gestural content of archival footage from situations of revolution or protest to develop abstracted interventions and choreographies.

Her work has been presented internationally in institutions including Mumok, Vienna; GfZK, Leipzig; Devi Art Foundation, Delhi; the education programme of documenta13; the Swiss off-site Pavilion, Venice Biennial 2011, BAK, Utrecht/Former West.
Her texts have been published in/on eipcp.net, Reviews in Cultural Theory, Texte zur Kunst, Springerin – Hefte für Gegenwartskunst, and other publications. She lives and works in Berlin and Vienna and is currently a participant in the PhD in Practice program at the Academy of Fine Arts in Vienna and a recipient of a DOC-Fellowship of the Austrian Academy of Sciences.

A Vocabulary of Revolutionary Gestures. (Materials from a work in progress) is an ongoing research supported by Academy of Fine Arts Vienna.

On the 12-13th of October a workshop with the same title will be held by the artist.

Participation at the workshop is free and requires registration in advance through email at the address office.ro@tranzit.org. 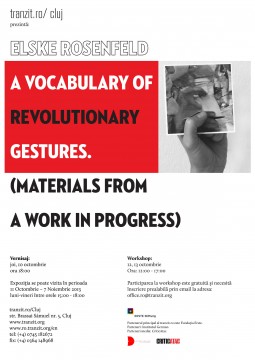