tranzit.ro/ Bucureşti - In This Pavilion One Can See Art

In this pavilion one can see art
Romania in Venice. 89 years with La Biennale

With the support of:

On the 19th of June 1954, Romania was going back to its Pavilion in Giardini di Castello, at the XXVIIth edition of the Venice Biennale, after an absence of 12 years. Two years before, the Pavilion had been lent, in equal measure, to Mexico and to Guatemala. An official delegate, before the opening in 1954 was writing self-congratulatory about this temporary generosity, thanks to which the pavilion only needed minimal repairs. In 1988, after another break of participation in Venice, Napoleon Tiron found, instead, an abandoned Pavilion, overgrown with ailanthus trees.
In 1942, the exhibition in the Romanian Pavilion was organized by the Ministry of National Propaganda. As one entered the space, the gaze was confronted by two portrait sculptures: oversized, Marshal Antonescu. Smaller – King Mihai. It was four years before that historian Nicolae Iorga had bought and built, through his personal efforts, the Romanian Pavilion in Venice, part of a larger structure, the Fascist architecture of Italian Brenno del Giudice.

The Venice Biennale was born in 1895 and became shortly a landmark for international art. A follower of the Universal Exhibitions, the biennial hosts now 29 national pavilions only in the Giardini Napoleonici: the first one, of Belgium, built in 1907; the last one, of South Korea, built in 1996. With each edition, the number of participating countries grows. In 2013, 88 nations exhibit in Venice, spread throughout the city.

The history of Romania’s participation at the biennale is fragmented, built from absences and presences. It can be read in the documents, in the local and international press, in catalogues and photographs, reconstituted from the dialogue with artists, curators and commissioners. It begins neither in 1954 nor in 1938 but politically it starts over in both moments. In 1924, Romania is present for the first time as a nation at the biennale, with a giant-exhibition, in Palazzo dell'Esposizione: 106 works and 36 artists, a visit card of young Romanian art. The next participation is only in 1938, when the soundtrack in the background of the Pavilion’s inauguration was provided by the Fascist anthem Giovinezza.

In 1948, the Biennial reopens, with big art retrospectives which were supposed to cure the world wounds after the war. In 1954, Romania comes back in full force. The Pavilion becomes an important propaganda instrument. “In this Pavilion one can see art”, wrote a visitor in the Visitor book of the Popular Republic of Romania’s Pavilion at the Venice Biennale. From that moment a well-moderated debate can be followed, about the “healthy” art vs. the demonized, Western one. A breakthrough is represented by the Ţuculescu retrospective, curated by Petru Comarnescu in 1966. With an extraordinary reception in the Western press, this comes “too late” for an artist already gone. The period between 1968 and 1982 is marked by the personality of the art critic Ion Frunzetti; in the Pavilion are presented those who in Romania occupy the local artistic scene. The 90s are the years of artistic recuperations, with commissioners Dan Hăulică, Radu Varia, Coriolan Babeți. Starting with 1999 and the exhibition curated by Judit Angel, presenting Dan Perjovschi and SubREAL, Romania – writes the Western press – “finally speaks the same language with us”.

The Romanian Pavilion in Venice is the meeting ground of the diplomatic relationships and the cultural policies. Political from its own inauguration, in 1938, it traces much more than the history of Romanian art in the 20th century. The current exhibition presents a transversal look upon the pavilion’s history, inside and outside, from the periphery to the centre and back to the margins. It identifies a history of successes and failures, with moments of high representation of “national art”, which have oscillated in their identity depending on the political moment.

Daria Ghiu (born 1983, Bucharest) is a doctoral fellow at the Swiss Institute for Art Research (Zurich) within the Focus Project `Venice Biennale` and a PhD student at the National University of Arts in Bucharest, with a thesis on the history of the Romanian Pavilion. In 2008, she has been an art mediator for the art biennial Manifesta 7 in Trentino, Alto-Adige, Italy.
She is an art critic, writing for different cultural magazines and art magazines such as Arta, IDEA arts+society, Igloo, Art Press, Turn On Art. A Global Vision on Contemporary Art). Since 2008 she is a permanent collaborator at the Romanian Cultural Public Radio, focusing on the local contemporary art scene.

tranzit.ro/ Bucureşti
Str. Gazelei nr. 44, sector 4
The exhibition can be visited by appointment.

In an adapted form, the exhibition will be itinerated to tranzit.ro/ Iaşi in Fall 2013. It is part of the programme “Fiction, Rhetoric and Facts”, developed by tranzit.ro in 2012-2013.

In the period 1 June – 24 November 2013 the Romanian Pavilion at the 55th Venice Biennale presents the project “An Immaterial Retrospective of the Venice Biennale”, of the artists Alexandra Pirici and Manuel Pelmuş.
http://issuu.com/an_immaterial_retrospective/docs/shortguide 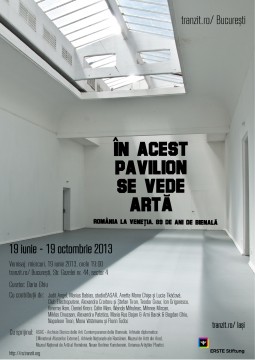 Related
An Immaterial Retrospective of the Venice Biennale