tranzit.ro/ Iaşi presents from the 23rd of September till the 9th of October 2012 the second event of the Hard Fact series:

Îmi place Periferic 3 (I like Periferic 3) by Cezar Lăzărescu is his first solo show and also the first retrospective exhibition of his work. An enigmatic figure on the contemporary scene of Romanian art, the artist is active since the late '90s.

With this first exhibition in a series of retrospectives, tranzit.ro/ Iaşi is attempting to show an exhaustive presentation of Cezar Lăzărescu’s works, realized during fifteen years of artistic activity, which is the same duration to date of Periferic Biennial, the first contemporary art biennial in Romania. A number of 32 works or documentations of performances realized in the past years, as well as two new works, Rural (2012) and Ţesătura Iaşi (2011) are installed in the new tranzit.ro/ Iaşi gallery, situated on the 7th floor of the IASITEX building. Among these we can also find key works like: Dacă n-ar exista Casa Poporului / If the House of the People didn’t exist or Apropo de situaţia din România / Referring to the situation in Romania.

Alb/ White (1999), Oglinda/ The Mirror (2000), Aesthetically Correct (2001), EXIT inside / ENTRANCE outside (2001) or Îmi place Periferic 3/ I like Periferic 3 (1999) are a different set of works realised in the frame of or aside the art biennial in Iaşi. A trademark of his practice is illustrated by the manner in which the artist decided to participate to the Periferic 2 Biennial, respectively to join with his work another performance realised by the well known artist Dan Perjovschi.

In the frame of the new institutional format used by tranzit.ro/ Iaşi, Propaganda Trips/ plimbări cu caracter de propagandă Cezar Lăzărescu will drive Matei Bejenaru and Vlad Morariu along a route in the city especially conceived for this event.

The trips in the city function as a service offered by tranzit.ro/ Iaşi to the artists, curators, activists or cultural workers. This service of an intimate character tries to counter the practices according to which between an art institution and an artist or curator only predefined exchanges exist. During the walks, the character of self-understood reciprocity that usually comes with these exchanges (the promise of a future collaboration) is annulled, making place for another type of production, which is immaterial, unregulated and unplanned.

Propaganda Trips were initiated by Matei Bejenaru, director of Periferic Biennial, as a way of presenting the local context for the different (national and international) artists invited to Iaşi for the biennial (1997-2008) and continued by Livia Pancu in the frame of Vector and tranzit.ro/ Iaşi.

tranzit.ro started its activities in 2012, in the four Romanian cities in which it activates (Iaşi, Cluj, Bucharest and Sibiu). Founded by a collective of curators and artists from Romania (Matei Bejenaru, Livia Pancu, Lia Perjovschi, Attila Tordai-S, Raluca Voinea), tranzit.ro aims at encouraging contemporary art practices developed in Romania within different local socio-cultural contexts, through a wide range of activities. 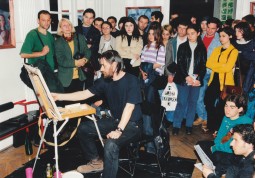