tranzit.ro launches with events in June

tranzit.ro events in June 2012:
11-12 June: launch of tranzit.ro in Iaşi and presentation of Hard Fact, coordinated by Livia Pancu;
- 11 June – 18:00h – lecture by Canadian curator Jesse McKee, followed by screening of a recent video and text work by Montreal based artist, Sophie Bélair Clement. The event takes place at the tranzit.ro space in Iaşi.
- 12 June – throughout the day – propaganda trips in the city, for Anca Benera, Arnold Estefan, Cezar Lăzărescu and Jesse McKee.

19 June – starting with 18:00h – brainstorming no. 1 - the responsible cultural agent (on art institutions, curators, artist’s role in time of changes). Event at Lia Perjovschi’s studio in Sibiu, organized by tranzit.ro in partnership with Curators’ Network.

tranzit.ro in Bucharest, coordinated by Raluca Voinea is working on the project Km. 0, a research exhibition, to be presented at the tranzit.ro space in Bucharest in Autumn 2012.

For its first two years of functioning, tranzit.ro operates under a common conceptual frame, entitled Fiction, Rhetoric and Facts, trying to create the context and facilitate the development of cultural and artistic projects that reflect and operate on the tissue of Romanian society, seen on the larger contemporary background. This programme is concretized in projects realized according to the curatorial conception of each tranzit.ro coordinator and to the local particularities in each city, as well as in larger projects and cooperations. 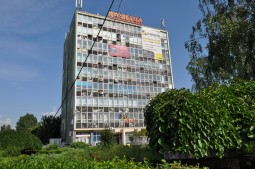