From August to December, the multianual project tranzit Iasi: Periphery. History. Contemporary Art continued with the residency of Bucharest based artist Cristina David and Chisinau / Iasi based artists: Elena Bonta and David Bonta.

During her residency in Iasi, Cristina David started her research into how to increase the number of schools named with female names, taking into account the overwhelming number of women involved into teaching and education. “In Iași County there are 606 mass pre-university education institutions (including kindergartens, primary schools, middle schools, colleges, high schools, technical schools, special schools, etc.). Of these, 109 are named after men and 492 have either a number instead of a name or, in some cases they borrow the name of the village or commune in which they are located. Only 5 pay homage to some women: Carmen Silva, St. Paraschiva, Elena Cuza, Otilia Cazimir and Veronica Micle. Thus, it has been established contacts with the principals several schools in Iasi county, in the hope that one will be willing to start the procedure of changing the name of the school. From this point, a further constant support will be initiated in order to assure the success of this administrative gesture." (Cristina David)

Elena Bonta and David Bonta are invited in Iasi to start a research into tranzit. ro/ Iasi projects archive, starting with 2012 up to now.
Elena Bonta (Chirila) (b. 1999) is a visual artist from Chisinau, where she studied graphics at the College of Fine Arts "Alexandru Plămădeală". The beginning of her artistic practice was based on the collaboration with the Oberliht Association of Young Artists in cultural projects in and about public space, such as Edu-Art, Public Facades, Flat Space, Public Space Days. The topics that interest her are feminism, the crises of the contemporary world, climate change, the challenges of young people in a capitalist world, and the fate of modernist-socialist architecture in Eastern Europe. She is now a student at the National University of Arts George Enescu in Iași, Romania, out of the desire to learn animation as a method of expression in future artistic projects.

David Bonta (b. 1997) is an artist born in Chisinau, Moldova. There he studied painting at the College of Fine Arts "Alexandru Plămădeală" and the History and Theory of Fine Arts at the Academy of Music, Theater and Fine Arts. His artistic activity is strongly marked by his work within the Oberliht Association of Young Artists, from where his interest in contemporary art, public space and culture as a common good begins. His creation, at the intersection of traditional and digital methods and research, is inspired by interdisciplinary themes such as the interaction of people with the post-socialist city, the preservation of architectural heritage, civic activism and political art. He is currently studying graphics at the "George Enescu" National University of Arts in Iași.

Multiannual cultural project co-financed by The Administration of the National Cultural Fund.

The project does not necessarily represent the position of the Administration of the National Cultural Fund. AFCN is neither responsible of the project content or of the way in which the
project results may be used. These are entirely the responsibility of the grant beneficiary. 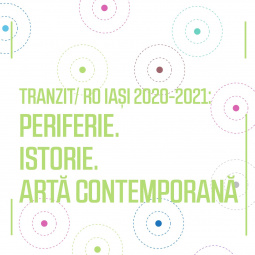