tranzit.ro/ cluj
In the frame of the project
“Fiction, Rhetoric and Facts”

Culture States is a project based on researching the states that disappeared during 20th century. The big number of ephemeral state formations, some that have existed for several decades, others just for weeks is the proof of political constructions, strategic or economic ambitions but also of ephemeral rhetoric, or of many antagonistic, conflicting visions, be they ethnic, national or geopolitical.
The lecture that Société Réaliste are giving in Cluj is the departure point for a wider project, which is to be materialized in an exhibition in Cluj in Autumn 2012, as well as in a publication that will comprise in addition different analyses and texts.

Société Réaliste is a Parisian cooperative created in June 2004 by Ferenc Gróf (1972) and Jean-Baptiste Naudy (1982). It works with political design, experimental economy, territorial ergonomy and social engineering consulting. Polytechnic, it develops its production schemes through exhibitions, publications and conferences. 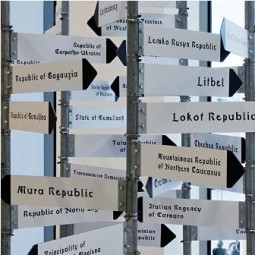