tranzit. ro/ Iasi will welcome in Iasi the Bucharest based artist for a fresh encounter with the city of Iași, a city that he had visited since Periferic Biennial was organized here, in 2003. During his staying in Iasi, we will be looking together at his long time practice while identifying new artistic research and production strings in the public space.

Eduard Constantin is an artist and designer based in Bucharest, Romania. He works with a variety of media and many of his projects have a processual character, developing as series on different periods of time. His recent projects include: "Passers-by with no Shadow" (2020-in progress), a series of watercolours realized during the emergency state caused by the coronavirus pandemic; “The Last” (2019-in progress), a series of drawings of species that went extinct, recorded since 1977, the year of his birth, “Resurfaced” (2020-in progress), again looking at species that went extinct but reappeared, and “The First” (2015-in progress), another series of drawings, depicting people, objects or situations that created a landmark and which the artist considers important for his own life or practice.

This residency is part of the project RESEARCH. PRODUCTION. DIALOG / CERCETARE. PRODUCTIE. DIALOG which is taking place between 2020/ 2021 and is realised with the financial support of Iasi City Hall through the Programme of financial support of Civil Society projects from Iasi, law 350/ 2005, related to grants from public funds supporting not for profit activities from Iasi City Hall budget. Iasi City Hall is not responsible for the content of the project or how project results can be used. These are entirely the responsibility of the beneficiary of the funding. 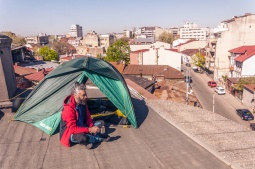