Socialist architecture as a resource or the image of attrition, abandonment and precariousness

Between September 12-25, 2021, the artist Ștefan Rusu was the guest tranzit. ro/ Iasi, in a research residence.

“I discovered Iași in the early 90s; after that I came quite often. Whenever I was returning, I always had the impression that I know it quite well. Today, I realize I don't know much about this city. The routes were initially planned in the perimeter of the Technical University with the related faculties, the student campus in Tudor Vladimirescu, the Centru and Copou neighborhoods. During the residency, these routs were expanded in other neighborhoods, some previously checked on the run and other not at all known. To these, I added this time the C.U.G. industrial area. Thus, during this staying in Iași I documented and researched the socialist architecture in the context of the city of Iasi and the final outcome was that I manage to include the neighborhoods of Nicolina 1 and 2, Dimitrie Cantemir, Tătărași Sud and Nord, Păcurari, Podu de Piatră, Podul Ros, Copou, Centru, C.U.G. industrial area. My research was and is motivated by several factors that are including the lack of preservation of the patrimony built in socialism, the negative perception towards the mass-produced blocks and, consequently, the lack of adequate maintenance of the blocks from the modernist and post-modernist period made of prefabricated concrete elements. ” (Ștefan Rusu, 2021)

Some of the visual materials will be found in open source format on social platforms - tumblr and instagram (@insularmodernities, @socialistcity and @socialistarchitecture_and_urbanism). At the same time, part of the collected material will be used to assemble another chapter of the project Endangered Species: A plea for a Red Book of Soviet Modernism adapted to the Romanian context and focused on the state of conservation of the modernist heritage from Iasi. In 2022, tranzit. ro/ Iasi will organize a public presentation focused on the vocabulary and practices of intervention and reproduction of public space, which will also include the results of current research.

Ştefan Rusu (born in 1964, Câietu, Moldova), currently based in Islamabad, Pakistan. His artistic/curatorial agenda is geared towards the social and political changes in post-socialist societies after 1989. Beginning with 2000 he was involved in the development of KSAK – Center for Contemporary Art, Chisinau where he produced curatorial projects and art initiatives and following the years 2005-06 completed Curatorial Training Program at Stichting De Appel in Amsterdam, where he co-curated “Mercury in Retrograde”. He is the curator of projects and editor of publications: Spaces on the Run (2015), Chisinau-Art, Research in the Public Sphere (2011). Stefan is a member of IN SITU – European platform for Artistic Creation on Public Space. 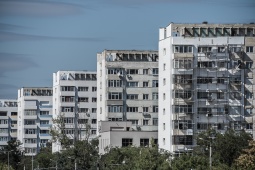