From Near to Far

Visual Cartographies of the Spaces 2 Mai and Vama Veche

The subject of 2 Mai and Vama Veche has been explored in the past 20 years from various perspectives. Novels, biographies, seasonal articles, stories have been written, as well as academic research: dissertations with ethnographic, anthropological, economical and historical nuances. Thus, the two villages have long been more than dwellings on the shore, they have a special character in the landscape of Romanian seaside, difficult to frame, but interesting to research. The exhibition ”From Near to Far. Visual Cartographies of the Spaces 2 Mai and Vama Veche” continues, in a different medium from the PhD research whose extension it is, the research made by Iuliana Dumitru about the narratives and mythmaking of this space. Starting from her emotional bond with this area, as she is born and raised in 2 Mai, the curator adds a visual layer to the narrative research she has already made.

The works have been made between 1960 and 2015 and represent explorations of the space framed by 2 Mai and Vama Veche, places known to a large audience because during the communist period, these were the favoured places of the intellectual bohemians, alternatives to mass tourism and fixed schedules, allowing those going there to have a certain freedom, favourable to artistic creation. The purpose of the exhibition is to change the way we relate to a space, known only through a certain prism, that of a destination for self-organised vacations. Alongside artworks and documentary work, archive material, artifacts and daily use objects will also be showcased, trying to render an ample portrait of a space which is also one of dwelling, not only of seasonal visiting. Thus, through the variety of the materials showcased, the exhibition will align itself to the series of research exhibitions organised by tranzit.ro/Bucharest, contextualising works of art and integrating them in a wider cultural and social discourse.

The main partner of tranzit.ro is the ERSTE Foundation. 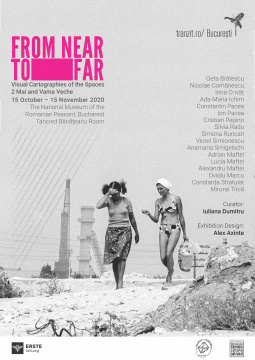