JENS HAANING: Untitled (Light fitting from the House of the People, Bucharest), 2018

Untitled (Light fitting from the House of the People, Bucharest) / Fără titlu (Corp de iluminat din Casa Poporului, Bucureşti), 2018 is the new work by Jens Haaning in Romania, twelve years away from his previous intervention on the Iaşi local context***. While in 2006 he decided to dispossess the organisers of ten sets of biennale catalogues in order to displace them and to resettle them in a situation in which they would no longer be able to signify anything but uselessness outside the field of art (the catalogues were sent to the central post office of Conakry, Guinea), in 2018 Jens Haaning displaces a light fitting from the Bucharest House of the People in order to install it permanently in the tranzit.ro/ Iaşi space. This object is not – as many of us would be tempted to assume – a valuable chandelier, custom-made for the building, but instead a humble light fixture (one of the dozens of thousands we are not used to see or to mention in our remarks regarding this building).

Given the circumstances of 2018, it is difficult to look around us without the lenses of the ideologies of capitalism. Being rational nowadays becomes being loyal – obligatorily – to the capitalist logic. It is not by chance that we are talking about "the palace of the dictator Nicolae Ceauşescu" instead of about the intended head-office of the entire state administration of the Socialist Republic of Romania. In terms of linguistics, the choice between the word "palace" and the word "house" could not have been a random one. Today, the vocabulary itself adapts exclusively to the ideologies within which capitalism can operate. 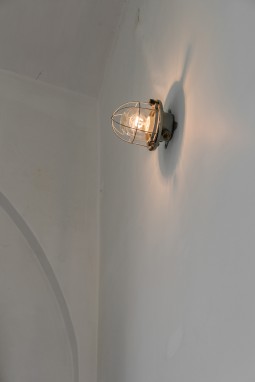