h.arta: A country like the ones they have in the West

“Using as a starting point the anti-corruption protests that took place in Romania in January-February 2017, we wanted to reflect on the ways in which the context of the protests radicalized the already exiting discourses against the state, state that in the imaginary of the middle class was already seen in opposition to the “democracy” and “civilization” of neoliberalism. We gathered an eclectic and often contradictory material that refers to the discourses against the social safety net, to the discourses that idealize the privatization of the health and education systems, which refers to all these attitudes of desolidarisation of the middle class from everything that is common and egalitarian. A material in which an anti-communist stance is very visible, a stance of the protesters and of the middle class in general, a stance that equalizes the socialist period only to terror, bureaucracy and wooden language, while all its emancipatory potential is erased. Over all these, hovers the danger of nationalism and right wing extremism, not yet undertaken as such, but always there. This material, consisting of images from the protests, texts written on banners, as well as fragments of text written by us forms an unclear and contradictory weaving. A weaving in which the threads of valid and democratic anti-corruption positions are tightly interwoven with the neoliberal and conservative stances.” (h.arta, October 2017)

h.arta is a group of 3 women artists (Maria Crista, Anca Gyemant and Rodica Tache) whose projects focus on knowledge production and alternative educational models in a feminist frame. We use different forms and formats, such as events, discussions, publications, everyday objects attempting to create new spaces for political expression and action. Our projects are most of the time based on collaboration and we frequently work together with other artists, human rights activists, schools, etc. Our methodology is based on friendship, which we understand as an everyday negotiation of differences, as a way of learning from each other, and as a political statement about the power of solidarity.

THE GLITTER(Y) AND THE MISERY OF THE EUROPEAN MIDDLE CLASSES is a project organized by tranzit.ro/ Iași between June and November 2017. 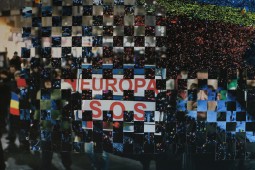