“The infinite emerges from chance, which you have denied.” (Stéphane Mallarmé: Igitur)

“Self-portrait with Valerian” is the first exhibition of Yuri Leiderman in Bucharest, after his works were presented many years ago at Periferic Festival and Biennial in Iasi. It is a fictional reconstruction of a studio the artist might have had somewhere in the Far East, where he retreated to explore the history of painting. The space of tranzit becomes a Valerian Pavilion, situated as a continuation of the garden and as a place of contemplation, memory gathering and Dionysian poetry writing.

The works in the exhibition overlap and line up in front of the visitor a series of figures from history, politics, literature, art, science, philosophy, collated and juxtaposed on colourful backgrounds that lend these characters life, halos, mystery or simply indicate the mental connection that brought them on the artist’s canvas in the first place. Pushkin with his angelic hair and his icon status in Russian literature, together with the genealogy that Yuri Leiderman creates for the Moscow Conceptualists; mineralogist Alexander Fersman and a couple of apatites, minerals that are strong pigments but can also be found in the composition of moon rocks; Kennedy and the space race with the Soviet Union that he could have turned into a cooperation had he lived to do so; Yasser Arafat on a cross and with his keffiyeh patterned by the throw of dice; Doku Umarov, the once most wanted jihadist in Russia, now supposedly dead, appearing at sunrise from the luxurious grass, and, in the other corner of the room, a famous image, albeit reinterpreted, of Putin fishing.

Leiderman builds a self-portrait that is only readable as such to those who sit around a table with him and listen to the stories. He is one of the Moscow conceptualists himself and he has a collection of minerals in his real studio in Berlin, he is a poet as much as a visual artist and he has a more recent radical distance to Putin’s Russia, but these biographical details are not directly transferred to the works. Instead, an elaborated process of connections and chance discoveries or decisions lead him from one work to the next and from one motif to its repetition or variation.

Valeriana officinalis is the plant from which Corvalolum is obtained, a medicine made in Ukraine and Russia and used, among others, for depression. His Self-portrait with corvalolum is the starting and the end point for Leiderman’s exhibition in Bucharest – an indication of the level of intimacy with the artist that he has decided to expose us to. When the characters in the paintings become too haunting, there is the promise of valerian – it can calm us down, it can put us to sleep but also, according to Romanian mythological use, it can chase away the bad spirits.

As in ancient China’s Orchid Pavilion Gathering, Yuri Leiderman invites us in his Valeriana Pavilion in the Tranzit Garden, maybe not as himself but as this forgotten artist who places glasses of wine on an imaginary river stream and invites us to share his memories.

Yuri Leiderman was born in 1963 in Odessa, Ukraine. He participated in apartment exhibitions in Moscow and Odessa since 1982. Graduated from the Moscow Institute of Chemical Technology named after D. Mendeleyev in 1987. He is one of the founding members of the “Medical Hermeneutics” group in 1987, which he left in 1990. During 2007–2008, Leiderman was a participant of the Kapiton Group (with Andrei Monastyrski and Vadim Zakharov). He is also the author of several books of essays, fiction, and poetry, including: “Notes” (2013); “Flower Garden” (2012); and “Olor” (2004). In 2005, Leiderman received the Andrei Bely Prize, the most important independent literature award in Russia. Recent exhibitions include: Odessa Biennale, 2017; Kyiv Biennale - “The School of Kyiv”, 2015; “New Works”, Galerija Gregor Podnar, Berlin, 2013; “HeimatKunde”, Jewish Museum, Berlin, 2011; “Die Ehre hüt von Jugend auf”, RWE Tower and Museum Folkwang, Essen, 2010; “Yuri Leiderman”, Centre d’art contemporain Geneve, Geneva, 2008; and “Birmingham Pattern” (with Andrey Silvestrov), Ikon Gallery, Birmingham, 2007. He lives and works in Berlin since eleven years.

The exhibition will also be open on several weekends throughout its duration.

The exhibition of Yuri Leiderman opens the Autumn season and it also marks 5 years of the tranzit.ro/ București space on Gazelei Street. Join us for this double celebration! 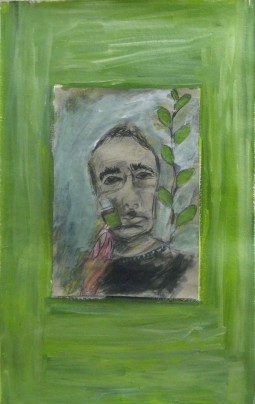