Suffering from the Irrational

Every year the Apocalypse seems to be a bit closer to our doorstep. Just when it gets really close, threatening to engulf us, it withdraws at the last moment, like a huge wave that broke before reaching the shore. We take a deep breath, party a bit longer by the light of the holidays decorations and then wait for the next wave. We see around people crashed by real sea waves but also by all sorts of other waves (of hunger, bombings, indifference). We see people who never dared to dream there is another life possible beyond or without the menacing wave. However, they are usually outside the circle we drew in the sand to protect us, the Apocalypse is always for them.

Vilmos Koter proposes the fourth exhibition that is responding to The Last Archive, Vlad Basalici‘ project which started in 2012, when the Maya announced Apocalypse was haunting all media. Will the wave reach us too this time? Could we hide from it, withdraw into our illusions and safe (art)spaces? The question “how was it possible?” starts to be asked in the opposite way than the one we came to know it, for now the absurd and the horrific and the constant end are the norm; we live in the state of exception and the short moments of bliss or even of regular, boring everyday life become rare treasures. How was it possible that we had such tranquillity, that we had time for us, to meet and to chat, to cook and to enjoy, to count the stars or to lie down in laziness, not in fear, to stretch outward in relaxation, not inward in hiding?

Suffering from the Irrational creates in the space of the exhibition the atmosphere of the-almost-happening, of anticipation as well as of ambiguity. Is there another catastrophe we should be waiting for to fall upon us or rather a protective layer? Should we embrace it together or should we run from it individually?

On those dates we will screen also the four episodes of the experimental film Hitler, ein Film aus Deutschland [Hitler, a Film from Germany], realised by Hans-Jürgen Syberberg in 1977: Der Gral - Von der Weltesche bis zur Goethe-Eiche von Buchenwald / The Grail - From the Cosmic Ash-Tree to the Goethe Oak of Buchenwald, Ein deutscher Traum ... bis ans Ende der Welt / A German Dream ... Until the End of the World, Das Ende eines Wintermärchens und der Endsieg des Fortschritts / The End of a Winter's Tale and the Final Victory of Progress, Wir Kinder der Hölle erinnern uns an das Zeitalter des Grals / We Children of Hell Recall the Age of the Grail.


Vilmos Koter is a visual artist from Romania. He graduated in 2004 from the University of Art and Design in Cluj-Napoca. He had numerous exhibitions in different countries, among others in India, and has participated in the internationally South Korean Geumgang Biennale. He collaborated with AltArt Foundation several times and he is a member of the Balkan Caucasus Collective. In his work the forms of expression are determined by the content, he chooses a unique medium for every project and deals with issues related to economy, human habits and traditions, religion, public spaces and nature. Now he lives and works in Bucharest.

The exhibitions realized so far within this project, as part of the collaboration with tranzit.ro/ București were The Old, the New and the End by Péter Szabó (2013), Redemption Day by Monotremu (2014) and What happens if nothing happens by Giles Eldridge (2015). 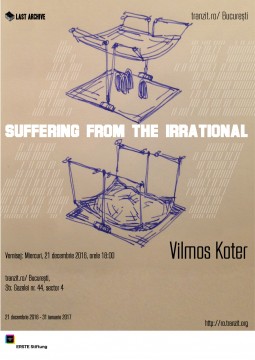 Related
What happens if nothing happens