Adelina Ivan and Nicoleta Moise present in this exhibition two projects in dialogue, each reflecting with different artistic means on 20th century fetishes of discipline, exercised with predilection upon women’s bodies. School education, sports competitions and workplaces were all testing grounds for training the body and its desires, for turning it into a productive machine approved by society. One’s own memory of childhood on the one hand, official images hiding in libraries on the other provide to the two artists the pools from which to extract and re-stage the image of these disciplined bodies.

Nicoleta Moise has worked since 2013 on the project I Am Not Entirely Happy Unless I Am Here, In My Country, which started with a delving into the 1935-1989 archive of Femeia [The Woman] magazine, a thorough journey through the pages of what was – especially during socialist years – the main magazine for women in Romania, providing the guide for the official conduct as well as the almanac of the modern woman’s accomplishments in an already achieved egalitarian society. With a medused gaze, the artist captured on a phone camera every image in the dusty magazines showing women at work in factories – smiling, concentrated on their tasks, surrounded by the structures and tools which weight was the guarantee of progress. The second part of the project was added when Nicoleta Moise travelled to Spain to study similar magazines, which were published during Franco’s regime. She chose images of women performing different sports or public propaganda festivities, silhouettes shaping the perfection of the disciplined collective body outlined against the Spanish hills and clear sky. The images from the two sources are overlapping and obliterating each other, in what the artist calls “cuts”, using a term borrowed from Hito Steyerl to describe the video/ cinematographic editing tool that can play god and use any part of a body, of a limb or of a landscape and combine it with any other one in a new, artificial body.

Adelina Ivan’s project 1.00 (ten) is evoking the figure of Nadia Comaneci, the gymnast who amazed the world and who enthused little girls in their aspirations and in their games. Nadia’s was the time when the human body was outsmarting technology and perfection could be attained by discipline rather than drugs. In a short film that is to premiere at this exhibition, Adelina Ivan recreates the moments when girls were playing “the Olympics”, only that for the contemporary protagonists the game is mediated by the description of what it was like. A field that has lost its aura and is currently shaken by painful confessions and scandals – gymnastics appears for Adelina Ivan’s characters as any other game, a graceful pretext for playing. Other exhibited works that are part of this project remind of Adelina Ivan’s formation as a designer while also framing commonplaces of memory for those who went to school during socialist years, from the abacus to the pioneer uniforms and the hierarchical braids. Yet, the artist is not giving in to nostalgia, she is not recycling memorabilia but instead turns her own memories into new objects, which original meaning has been lost for the younger generation, as in it is not needed anymore, as in it has lost its consistence. Just like the pioneer shirts are no longer the milky nylon uniforms but have become ethereal, with time evaporated from their threads.

*Frugalitas, severitas, fidelis are the three virtues of the Roman goddess Disciplina, a forgotten deity venerated mainly by soldiers.

Adelina Ivan (b. 1971, Bucharest, Romania) is a visual artist who works with light and memory through textiles, photography, installation and video. Recent projects and exhibitions have been presented at: Istanbul Design Biennial, Vienna Design Week, Kube Musette Bucharest, ODD Bucharest (all in 2016). Adelina has a BA in Art & Design from the National University of Arts Bucharest.

Nicoleta Moise (b. 1989) lives and works in Bucharest. In 2013 she graduated from the MA in Photo-Video Department at the National University of Arts in Bucharest. She works as a visual artist with found or searched archival images, with a recent interest for performing arts. Her works have been exhibited and presented at BWA Sokol Contemporary Art Gallery Nowy Sacz, Poland, Donau - Universität Krems, The National Dance Centre Bucharest and Galeria Posibila. 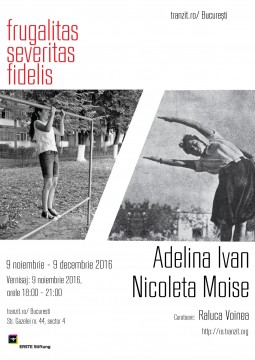